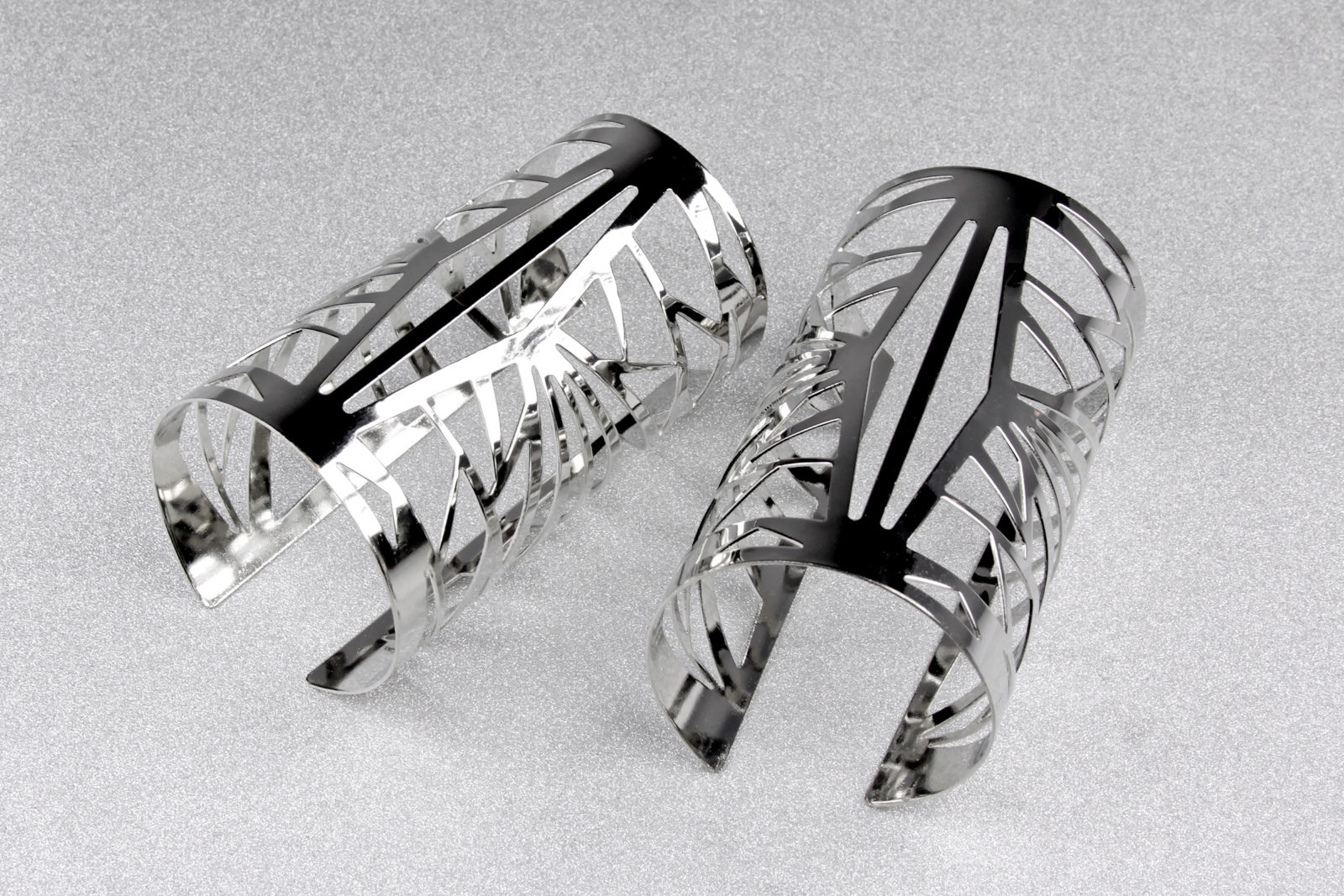 Today’s review features these silver bracelets as worn by Amilyn Holdo in The Last Jedi. From her very first appearance in Vanity Fair magazine, Amilyn Holdo’s outfit stood out. The draping and colour looked like a combination of Leia’s classic white dress with one of Padme’s purple gowns. Once the film was released and we got a full look at her costume with accessories, I know I had to have her bracelets, even if I had to make them myself. Thankfully, they are available to buy – and for a fantastic price!

The bracelets are priced at US$2.78 from this eBay seller – with free international shipping! This is the same listing I purchased my bracelets from – they took just under three weeks to arrive from China.

Amilyn Holdo costume bracelets (style #14) – US$2.78 each (price correct at time of writing) 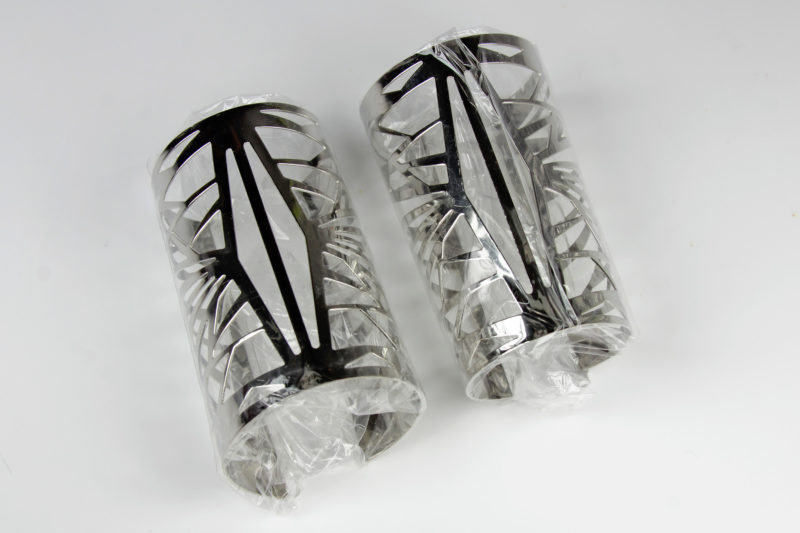 The bracelets arrived wrapped in clear plastic, to help protect the surface during shipping. As I expected, there is no manufacturer tag or any additional packaging etc. As noted in the eBay listing, these bracelets were shipped in a bubble bag. As the eBay listing is for several different bracelet styles, I was a little worried I might be sent the wrong ones (or this style in gold). I was so happy to see these when they arrived – they are so pretty! 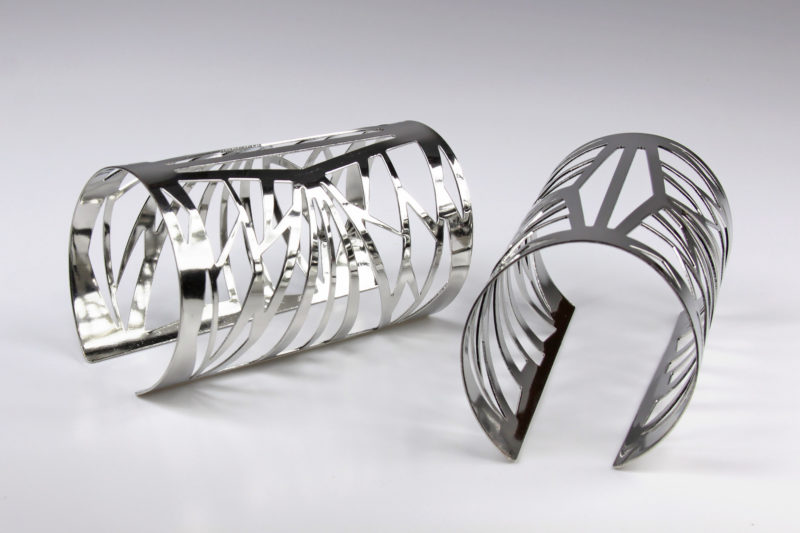 As fellow costumers will know, there’s nothing quite like being able to obtain screen accurate items. Comparing to promotional images, these have all the correct cut-out shapes, including the prominent long triangles across the top.

It is a little hard to tell from reference images if the actual costume bracelets were simply purchased items like these, or copies made for filming. The ones Laura Dern wore appear to have a slightly less shiny appearance than these ones, but the glossy surface here is an appropriate jewelry finish for everyday wearing.

In the Star Wars The Last Jedi Visual Dictionary, Holdo’s jewelry is described as ‘Gatalentan Jewellery’. The geometric cut-out pattern of the bracelets “…trace local star constellation patterns…”. Because the pattern has a meaning (if only invented to add more details in the book), it shows the importance of getting the shapes right for this design. 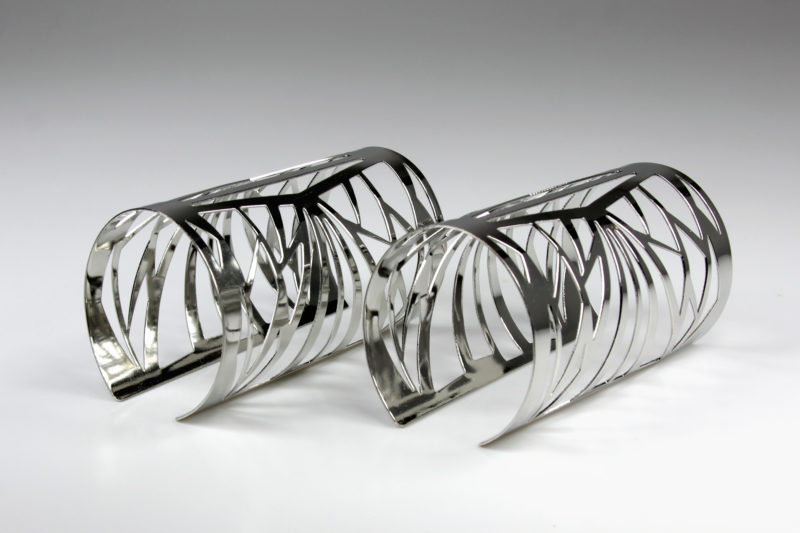 In The Last Jedi, General Leia Organa and Amilyn Holdo stand out among the Resistance fighters. They both wear quite formal attire, complete with jewelry. I am always inspired by the costumes worn by female Star Wars characters – but these women with demanding leadership positions decide what they want to wear and wear it with confidence and style.

…Holdo doesn’t wear the combat khakis and camouflage kit most often spotted in Resistance bases. Instead, her dyed hair and eye-catching clothing show her fierce devotion to her homeworld of Gatalenta and its independent spirit. Gatalenta is known across the galaxy for its poetry and the tranquillity and compassion of its inhabitants… 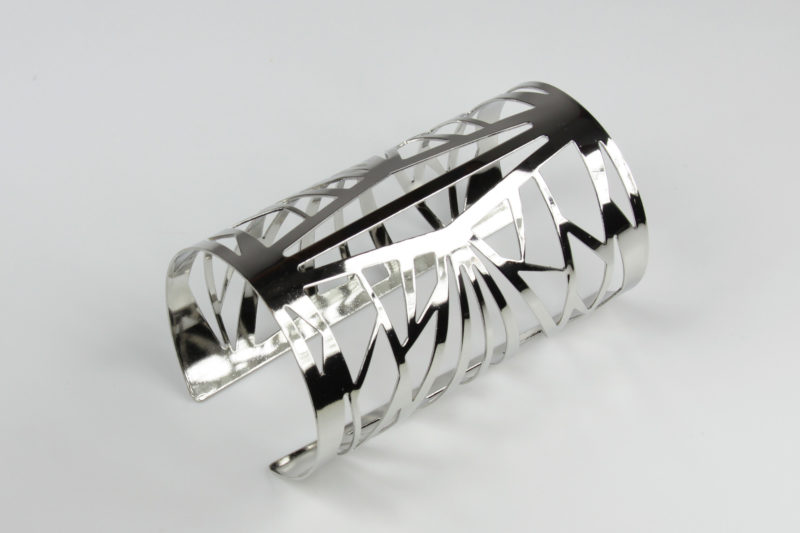 This is the sort of item that is very simple to make commercially, but complicated for fans to replicate. I had pondered about how I would go about trying to make these myself – it usually involved painful amounts of drilling and sanding. Seeing the clean and symmetrical cut-outs of these bracelets, I know I would never have been able to make bracelets as nice as these. 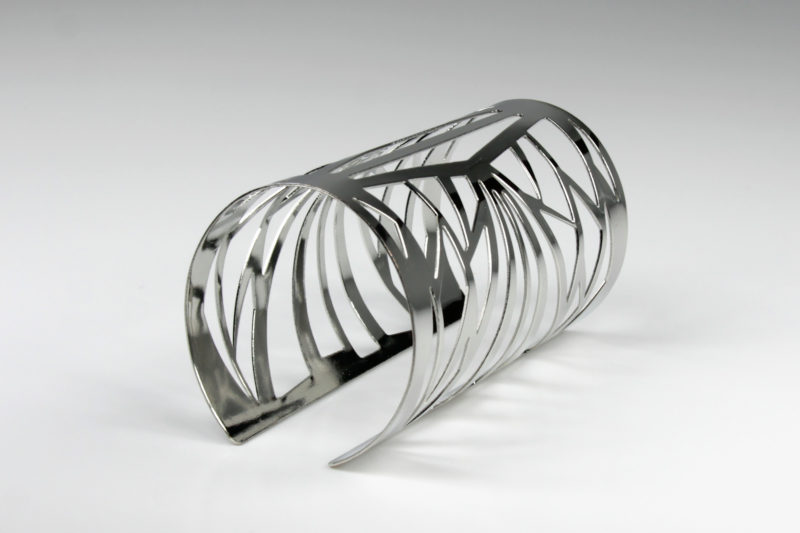 These bracelets are made from metal – the silver-tone finish is a coating, not the base metal. As such, the surface can be damaged by scratching against sharp objects. If you plan to wear these a lot (e.g. with a costume), then you may want to buy two extras – but at such a cheap price, it’s almost worth getting extras anyway! Personally, I ended up buying four – two arrived with tiny imperfections (not that noticeable in person, but would show up with enlarged photography in this article). 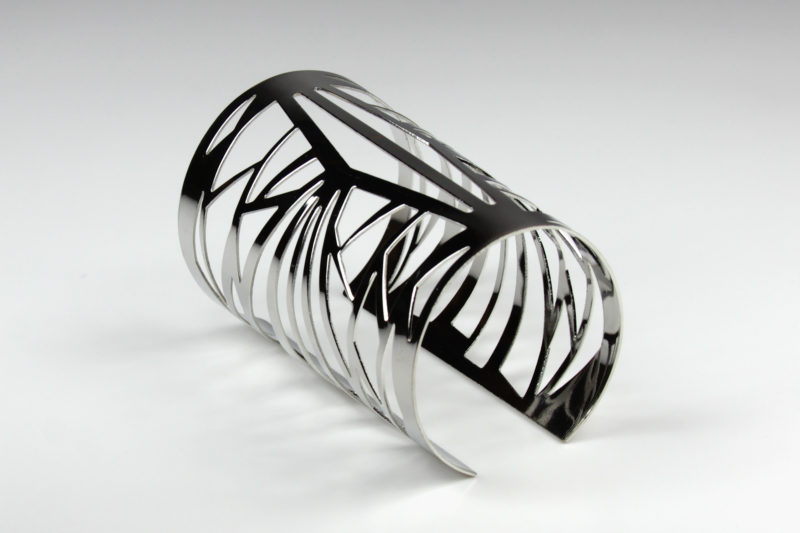 Made from metal, the bracelets are flexible – you can expand them to get them on your wrist. The ones I bought came with slightly different diameters, in that each was opened up in varying amounts. I found I needed to open them up more to get them on, but this is easy to do without feeling like you risk distorting the circular shape too much.

The metal is thin, which makes them lightweight and comfortable to wear. They don’t feel fragile, but excessive bending may risk causing a ‘crease’ at the finer points of the cut-out design. 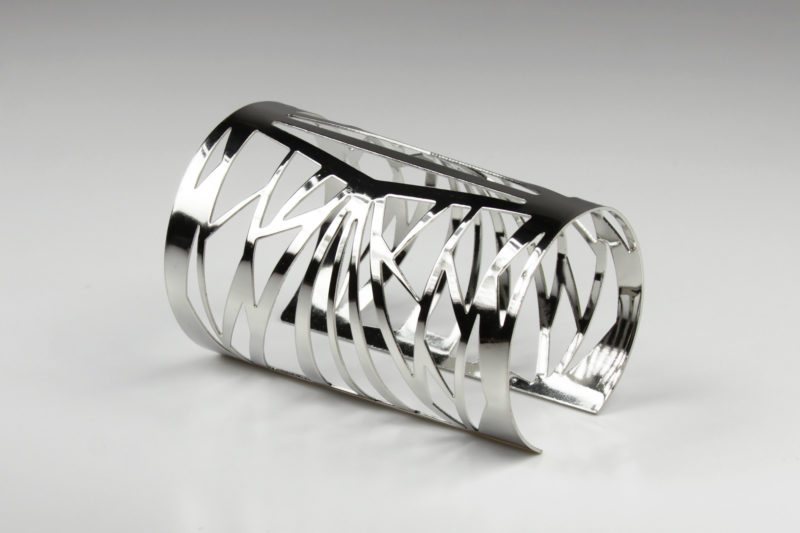 These are ‘one size’ bracelets. The measurement from end to end (length) is approximately 9cm. The bracelet shape is tapered, that is, smaller around the wrist end – not including the opening, it measures 14cm around at one end, and 16cm around at the other end. 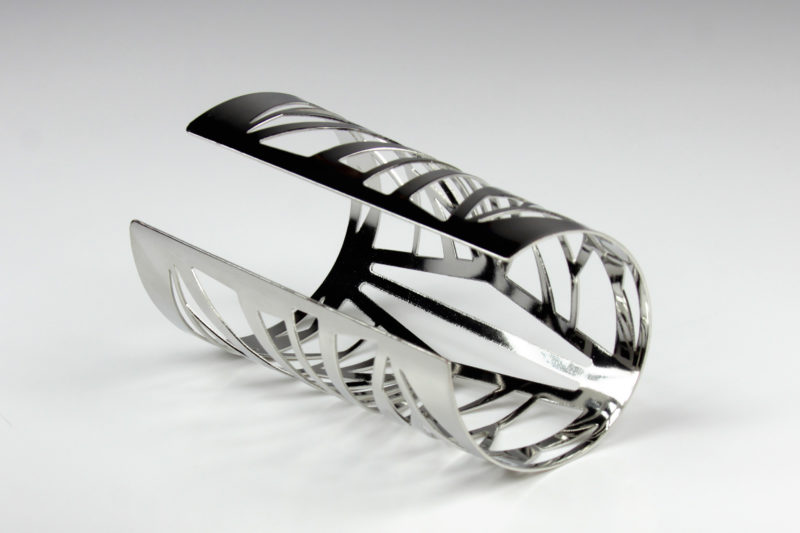 These bracelets are the perfect undercover Star Wars accessory – only keen eyed fans will recognise the Star Wars reference, to everyone else they are neat metallic cuffs! Wear them with a purple dress for a full ‘everyday cosplay’ style Amilyn Holdo outfit, or as the finishing touch to any outfit for some Galactic (or Gatalenta) style. 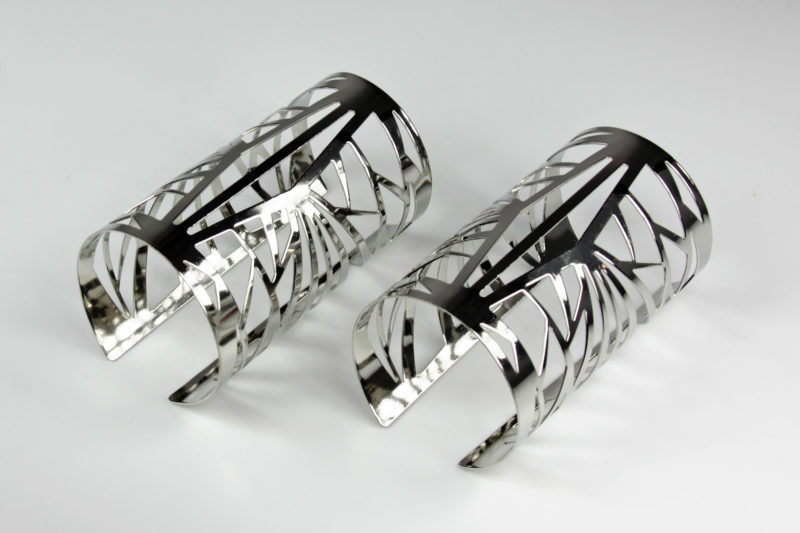