Thinkgeek recently had a promotion allowing customers to ‘cash out’ rewards points for a US$20 voucher, so I jumped at the chance to use my points towards some new Star Wars fashion. I picked up two items – a black Millennium Falcon tank top by Mighty Fine, and the sequin Imperial cog tank top made by Her Universe.

I loved the Imperial cog tank top the moment Her Universe previewed it at Disney’s Star Wars Weekends. As Her Universe doesn’t ship internationally (well, to United States, Canada and the UK only), I can only purchase their items by way of a mail re-directing service – which I have, but it’s always nice to not have to pay extra. So I was of course excited to see it available on Thinkgeek.com, which does ship directly to NZ. It’s retail price was US$29.99, very reasonable for a sequinned top. The Imperial cog design is created with flat silver sequins, which are smaller than standard sequins, so the design is very tidy and shiny. 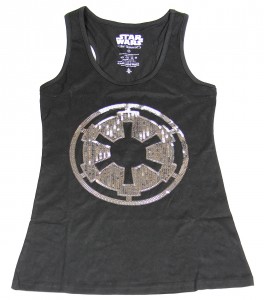 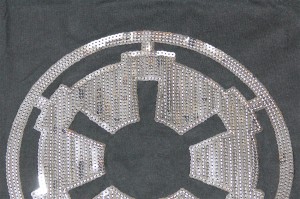 The Millennium Falcon tank top by Mighty Fine is a looser cut style, being slightly wider through the chest than Her Universe top though both are size small. It is also made from a softer and thinner cotton, adding to the casual style. The print is nice and vibrant against the black, with the vintage style Star Wars logo above the Millennium Falcon. It has a longer rounded hem, rather than flat across, which is a nice cut for this style. It’s retail price was US$24.99. 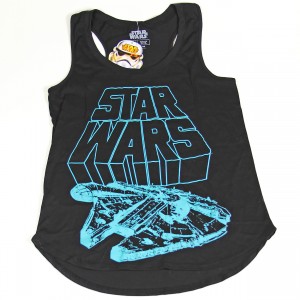 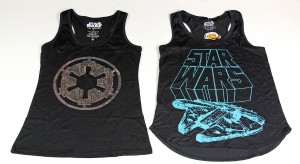