My first vintage Star Wars purchase for my wardrobe was the R2-D2 and C-3PO necklaces made by Weingeroff Ent. Providence, R.I. (licensed by Factors Etc, Inc) in 1977. They are amongst the first ever Star Wars merchandise – they feature the 20th Century Fox copyright details, with no mention of Lucasfilm. They were made in the United States, another point of difference compared to the jewelry made for subsequent films by different companies. After seeing the necklaces in person, I was impressed with their detail and design – and quickly tracked down the rest of the set.

The necklaces feature 6 different characters – C-3PO, R2-D2, Darth Vader, Stormtrooper, Chewbacca and X-Wing. According to the SW Collectors Archive, each pendant was made in two sizes, small and large – I believe mine are the larger versions. They came each in a plastic bag, with a little silver cardboard tag. I have noticed that these pendants come with two different chain styles, it may be because some came carded and some bagged? I am not certain, I haven’t bought one carded  as it seems a shame to open a carded vintage item for use when the bagged versions are easier to find. I prefer the larger ‘twisted’ style chain, and have collected pendants with it – you can see a comparison of the two styles between my two X-Wing necklaces.  As well as bagged and carded, I have found some were available with boxes, like my ‘thin chain’ version X-Wing necklace. I’m not sure if that was a separate item purchased from stores (to give the necklace as a gift etc.) or if that’s how some were sold. 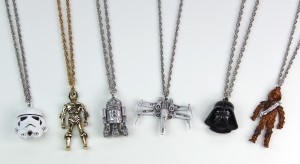 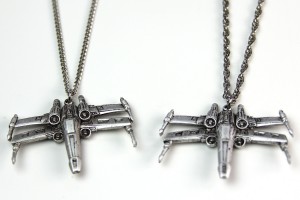 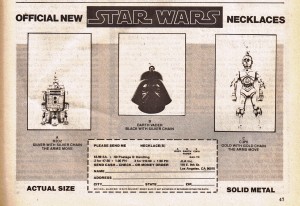 The C-3PO and R2-D2 seem to be the easiest to find. The stormtrooper and Darth Vader pendants are painted, so finding them without paint flaws/damage after 30 years is a little harder. I am not sure if Chewbacca is painted/enamelled, his bandolier is a separate silver piece attached. Also, the laser cannons of the X-Wing are more prone to breaking than the other pendants (one of mine came a little bent, but with a bit of careful force, you can bend them back straight). The arms of C-3PO, Chewbacca and R2-D2 (well, his side legs) all move, they are separate pieces that allow them to swing.

They seem to have been available from a variety of sources – pictured above is a mail-away order advert in Starlog Magazine, June 1978. There are store displays that show up on the second hand market from time to time, that allowed the necklaces to hang on display. A mail-away promotion run by Nestle’ when purchasing chocolate bars was also run. For vintage items, they are fairly easy to find, and for reasonable prices – I paid US$10-$25 for each of mine off ebay. 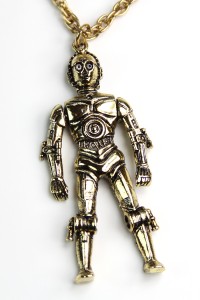 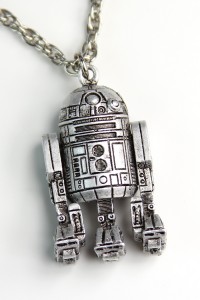 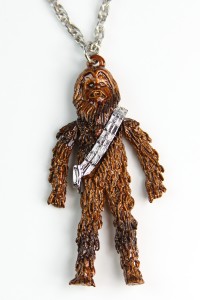 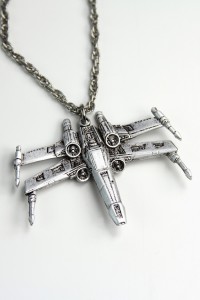 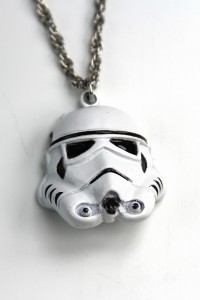 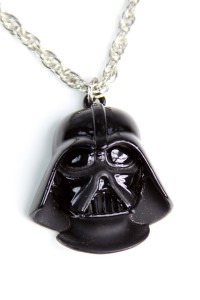