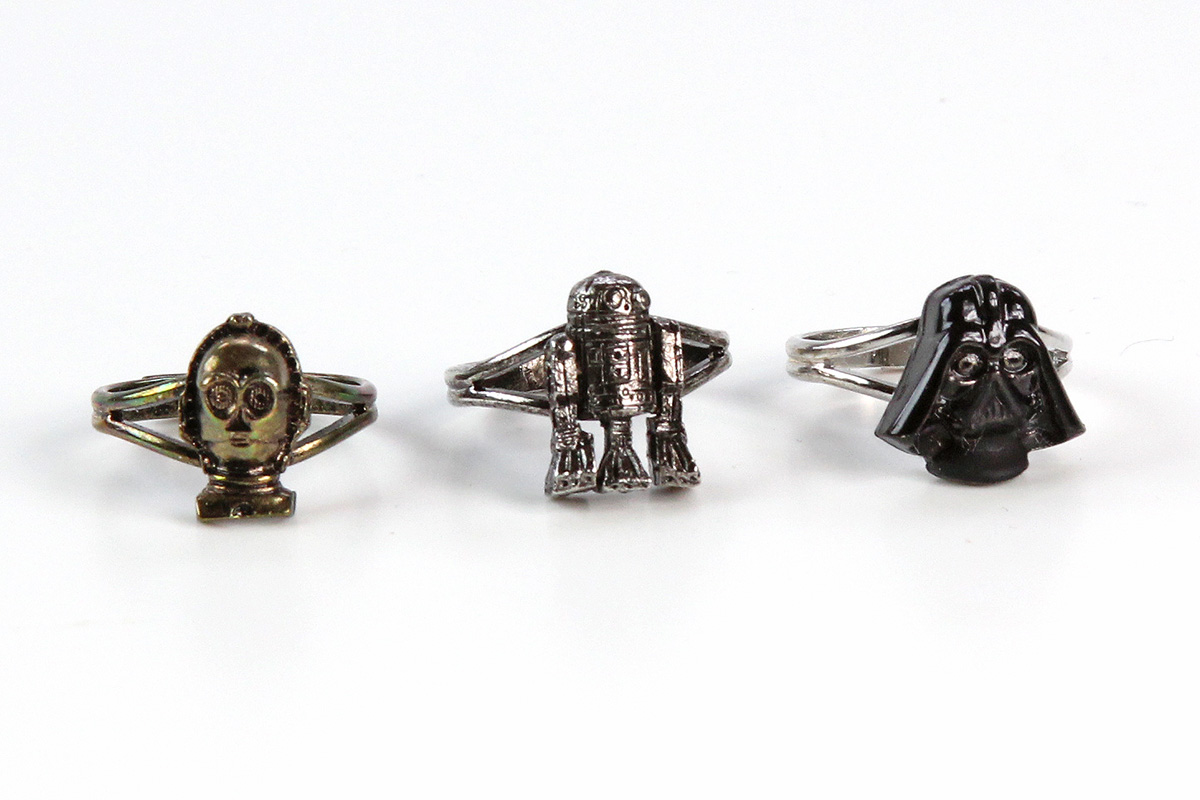 Impressed with the detail of the Weingeroff Ent. vintage necklaces from 1977, I am keen to collect more from their range. I recently picked up a boxed set of rings, featuring Darth Vader, C-3PO and R2-D2.

The rings came in a jewelry box, complete with satin lid lining featuring the Star Wars logo and 20th Century Fox copyright details, with a ‘May The Force Be With You’ cardboard insert. The velvet of the cardboard base has been a little damaged by indents caused by the rings, but not surprising considering it’s age and of course doesn’t affect the rings themselves. The plastic blue box measures approximately 6.5cm x 8.5cm x 3cm. 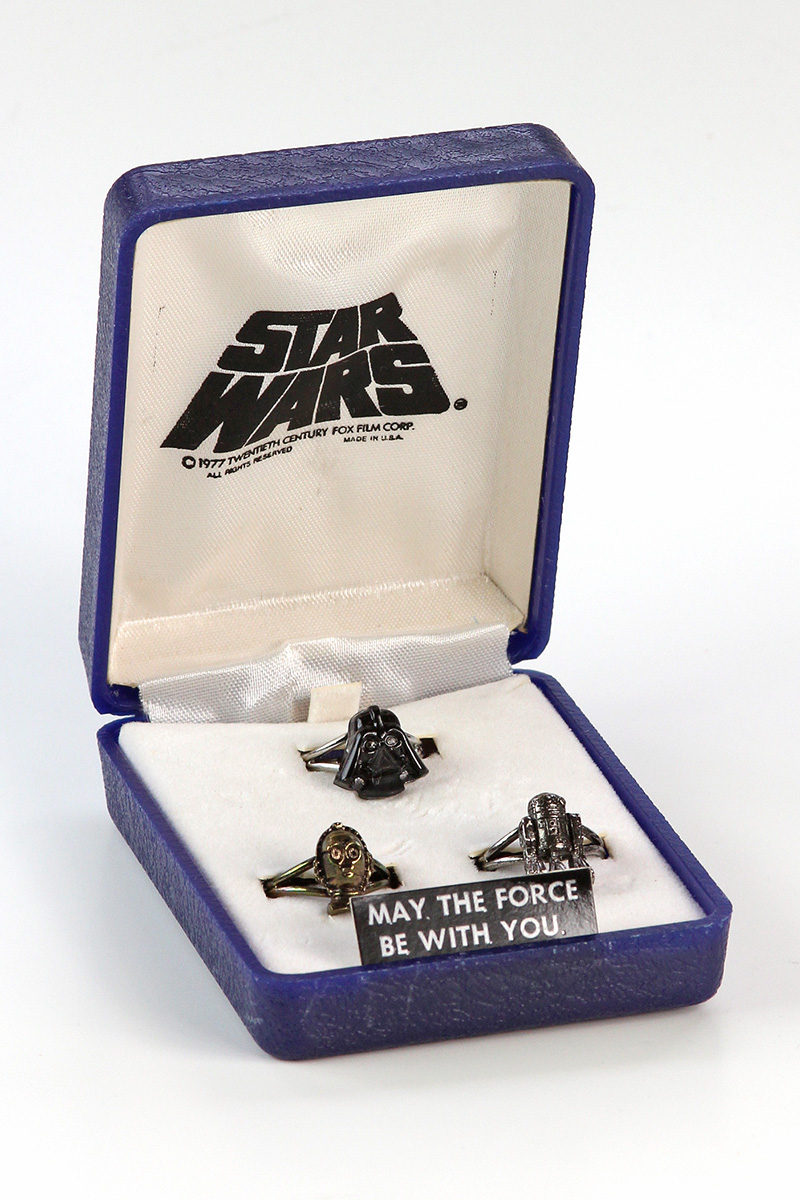 The rings are adjustable, with the band overlapping approximately 0.5cm. To me, this is slightly better method than the Wallace Berrie rings, allowing for a greater range of adjustment before the gap in the band becomes too wide. The ‘starting’ ring diameter is approximately 15mm, about the same as the Wallace Berrie rings, I can fit them easily on my little finger without adjustment. The bands of the R2-D2 and Darth Vader rings are silver colour, while the C-3PO ring is a dark weathered gold colour. The Darth Vader mask is painted, so is a little more prone to wear than the other two, which are unpainted metal. Interestingly, the ‘dome’ part of Darth Vader is gloss, while the front grill and neck is matte, an interesting detail. Each figure is approximately 13mm high, the sculpt detail still clear with their small size. 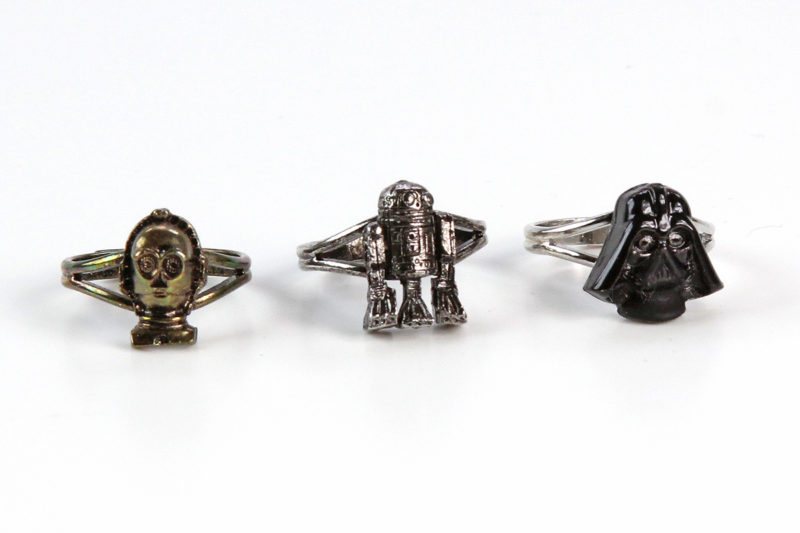 According to the Collectors Archive, there were three different ring sets made by Weingeroff Ent. One set featured Chewbacca, C-3PO and R2-D2, the second featured Darth Vader, Stormtrooper and X-Wing, and this set featuring Darth Vader, C-3PO and R2-D2. This set seems to be the most common, I paid US$20 for mine on ebay. I am very excited to be able to add these to my collection – now to find the others! 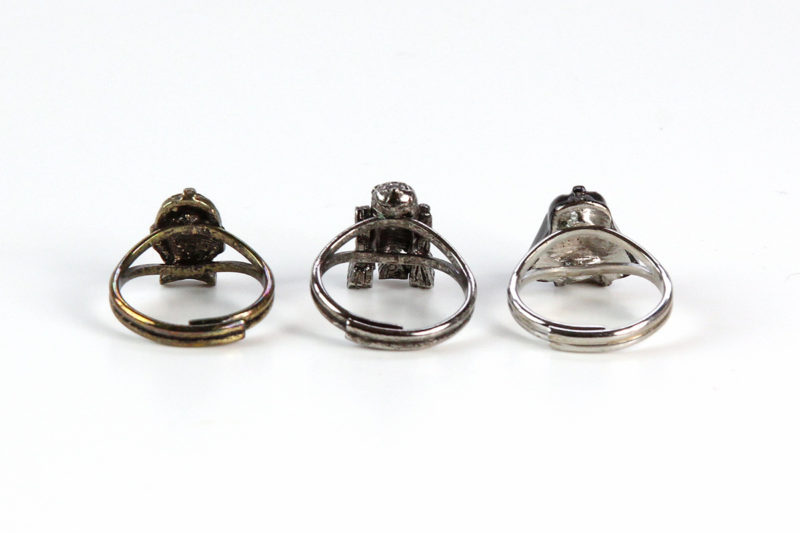