While at Celebration Anaheim, I was keen to stop by Thinkgeek’s booth to pick up the new Death Star charm bead. They had a promotion – buy 3 Star Wars charms, get 1 free, so of course I took the opportunity to pick up a few more charms on my wish list. I bought the Rebel Alliance logo, Imperial logo and Death Star charms, choosing the TIE Fighter as one for free. Every charm purchase came with Thinkgeek’s leather charm bracelet, so I was given four of those for free as well – though I had already bought one back in February with my first set. While the leather bracelets are made by Pugster, the charms are part of the SalesOne LLC licensed Star Wars jewelry collection. At Celebration Anaheim the charms were priced at US$35 each, pretty much the same as Thinkgeek’s website price of US$34.99 per charm. 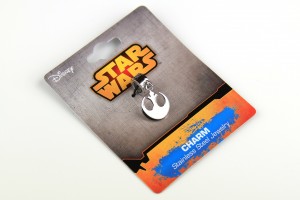 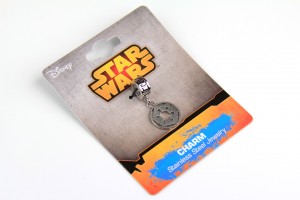 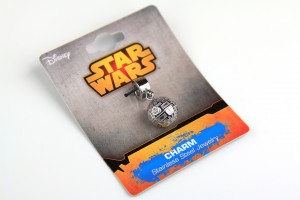 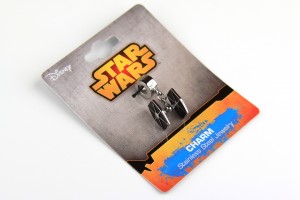 I knew before I purchased them, but the TIE Fighter and Death Star charms lack the Aurebesh text on the hanger ring. I think it’s a bit of a shame, as they stand out from the rest as missing that detail, but they are still fantastic charms. The Rebel logo hanger has ‘Rebel’ in Aurebesh and the Imperial logo says ‘Imperial’, as you would expect. One thing I noticed in person that wasn’t very visible in the advertising photos, is that the Imperial logo charm has a brushed finish, rather than shiny like the Rebel Alliance logo. I am a little curious about why they chose that finish, but it does look neat. I am of course very happy to add these classic Star Wars elements to my charm bracelet, though I hope to see maybe a few more Rebel Alliance charms (like the Millennium Falcon) to balance out all my Imperial ones! 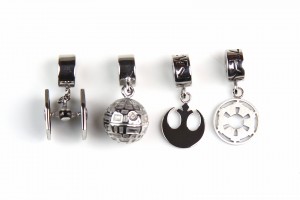 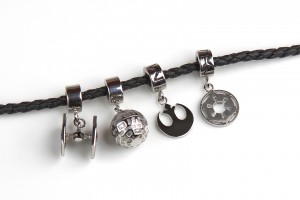