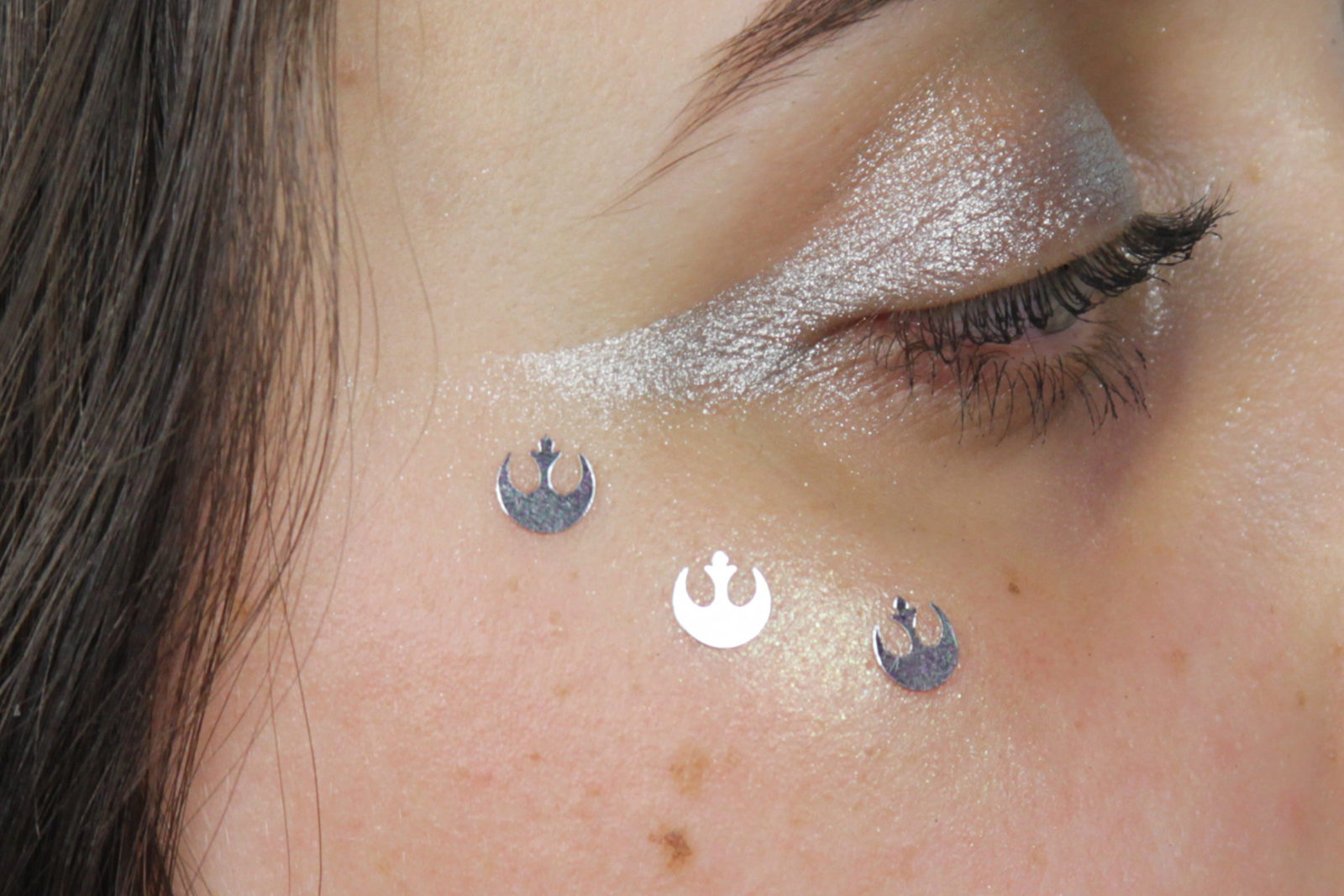 Today’s Nar Shaddaa Style article is inspired by Princess Leia and Carrie Fisher, to celebrate Carrie’s birthday today in NZ. For previous years I have featured Leia-inspired hairstyles but for 2020 I wanted to create a Leia-inspired makeup look.

For May 4th 2017 (the first ‘May the Fourth’ after Carrie had passed away), many fans wore ‘Glitter For Carrie‘ – this started with something Carrie herself was known to do. There are many stories of Carrie ‘glitter bombing’ friends and fans at conventions and in her stage shows, adding a little sparkle to your day with literal sparkly glitter. Now, glitter is something I will always associate with Carrie Fisher and Princess Leia #GlitterForCarrie

This look is modeled by my daughter, who loves to celebrate #GlitterForCarrie with me every year. We both met Carrie Fisher multiple times at conventions in the past, so it’s important to both of us to celebrate her legacy on her birthday. It’s also a wonderful mother-daughter activity, coming up with a glittery hair/makeup look to do together each year.

We started with a metallic silver eye shadow look, with a touch of highlighter on the cheekbones. We toyed with the idea of a cut-crease design with eyeliner, but decided to keep it simple and easy to replicate for this example. My daughter picked out one of her favourite lipsticks to complete the look.

The key piece of this look is Rebel Alliance symbol confetti. I found this tiny little Star Wars confetti last year, and knew it would be perfect for adding to a makeup look. This particular confetti came in silver, black, and blue – I haven’t been able to find it again since, but I’m definitely on the look-out for more.

A tiny dot of spirit gum (skin-safe adhesive) and these little symbol confetti pieces stick well to the skin. Much easier than trying to draw the symbol well in such a small scale, and very quick to add to any makeup look.

To try out another makeup idea, we also added a larger Rebel symbol on the other cheek. Using a darker metallic silver eye shadow, we used a small cut-out symbol as a stencil for the eye shadow. We then took a small makeup brush and liquid foundation to fill in the symbol and clean up the lines.

Both of these makeup techniques were quick and easy to do, and a fun way to add a little Carrie-inspired sparkle to a makeup look. I love to celebrate Carrie Fisher and Princess Leia with my fashion, now I can celebrate her with my makeup too.

May the Force be with you always, Carrie.

This article is part of our celebration of Princess Leia fashion, in remembrance of Carrie Fisher. Follow our coverage with the tag – Forever Our Princess #ForeverOurPrincess