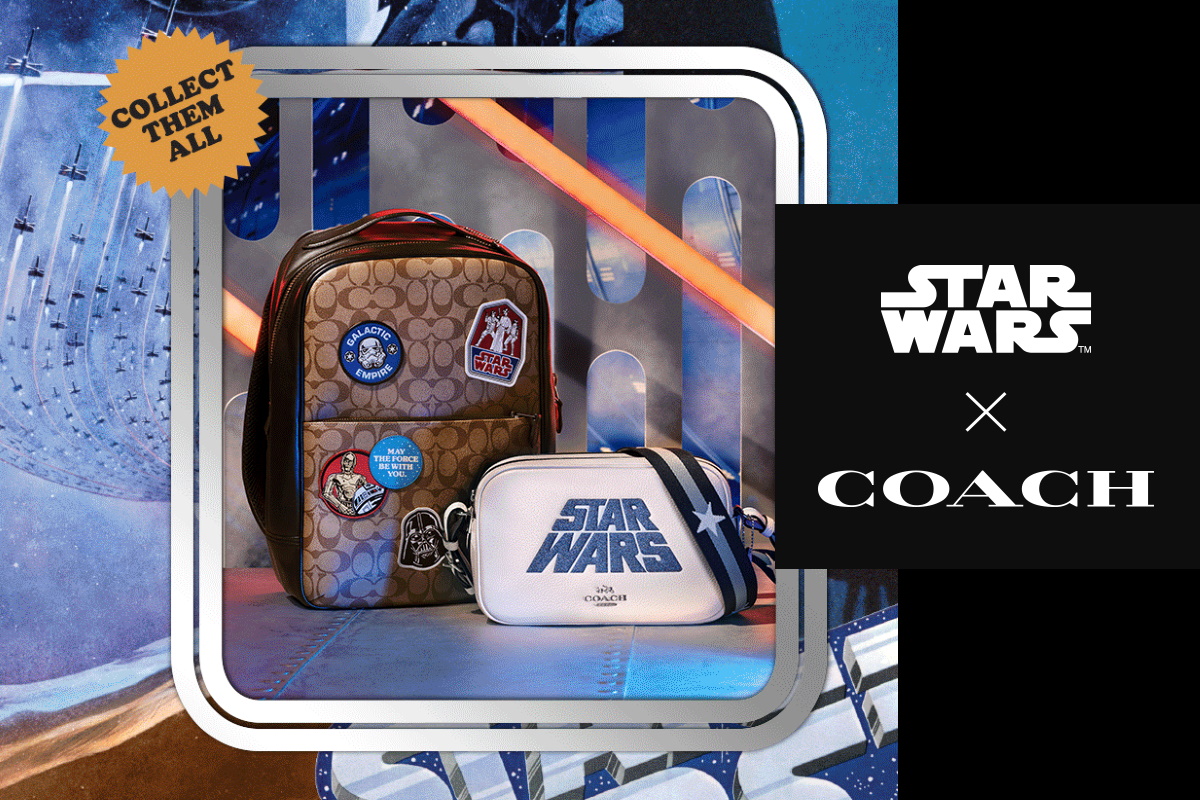 The Coach x Star Wars collection was released on 14 November 2019, and the scope of the collection was jaw-dropping. Only a few designs were featured in the initial advertising leading up to launch, with fans discussing which design they like best – only to be greeted with a staggering ninety-nine designs to chose from! As well as handbags and wallets, the collection also included apparel, key chains, and plush character teddy bears.

As you could image, this collection prompted a lot of thoughts.

The promotional imagery included the little ‘Collect Them All’ sticker, in reference to one that was used in vintage Kenner Star Wars action figure advertising…

The original Kenner line of toys was, you know, for kids. This Coach collection is solidly aimed at adults, and apparently, very wealthy adults at that. Including a cute little ‘collect them all’ sticker on advertising for a designer collection – that included ninety-nine items – feels a little misguided. It is supposed to be a joke? An instruction? Considering that a range this huge already feels like a cash-grab, I don’t feel like it was a joke worth making.

As well as the massive range of handbags in almost every style imaginable, the collection included apparel and footwear. While I’m never disappointed to see Star Wars apparel, I just sigh when I see men’s designs with no women’s style offered. Sure there are many women who can/prefer to wear unisex fit, but for those like myself with small feet, or just prefer to wear clothes designed with a different body shape in mind, it’s a let down. Sure I can wear a men’s size small t-shirt for a ‘relaxed fit’ look, but should I have to?

Including men’s but not women’s sizes felt a little confused – if you don’t think women will buy or wear Star Wars clothes, then why are you making Star Wars handbags? Of course there are Star Wars fans who identify as men or non-binary who will use a purse, but that’s still a small percentage, considering the sheer number of handbag and purse designs in this collection.

When designing any fashion collection, there is a process of elimination – some designs make the cut, others are refined, edited or discarded. When a collection includes ninety-nine items, with most prints repeated throughout, it gives the impression that the range was not the result of care and attention to detail. A mass ‘scattergun’ approach to get as many designs out as you can to appeal to everyone. The end goal – to make as much money as you can. Where is the design in that? And my eternal question – where are the female Star Wars characters? Not nearly enough representation of our favourite Star Wars heroines here.

For the average fan, they don’t need fifty Star Wars handbags – just a couple of favourites that suit their style and needs. Honestly, most of my handbags will probably never get used – maybe once or twice at a convention – but daily use is not why I bought most of them, they are more like collectibles to me. But I’m in a unique position, not everyone people can justify buying a handbag to store on a shelf forever.

For example, say you really only need ten handbags. Even as a Star Wars fan, probably not all ten will feature Star Wars designs – even I own a couple of plain handbags! Brands like Loungefly and Bioworld have made many cute Star Wars handbags over the years, almost all under the US$100 price point. If you want to spend a little more, Dooney & Bourke has been making Star Wars leather handbags for years now, as well as other interesting designs from brands like Harvey’s, State, Kipling, and more. So for handbag fans, there has been a great variety to choose from.

To be honest, I don’t think the Coach designs really stood out from anything that has been made before – the only different here is that the bags feature the Coach logo. Many designs only featured the classic Star Wars logo, which doesn’t really stand out when compared to bags from other brands that have only been getting more and more creative with their years of experience catering to the Star Wars fashion fan market. Of course I love a simple classic logo, but for the designer price tag, I want to see a bag with some design.

Often with collaborations like this, there will be a proportion of brand fans who don’t like Star Wars, aren’t interested in ‘collab’ collections, and will be annoyed at all the hype around a range they don’t like. Fair enough, they are there for the designer, and mixing it with outside licensing isn’t for them – and I expected to see those sort of comments. What I didn’t expect was to see how many Star Wars fans were disappointed with the range –

“I LOVE Star Wars and Coach, but I’m definitely not in love with this at all. It looks like someone just put patches all over the purse like it was an after thought or something. There was no creative thinking when these were put together.”

“Could have made a cute pattern with stars, lightsabers, or tie fighters but instead you just put the words Star Wars on the side. No thanks.”

“Coach bag basically with some patches. You can easily iron on your own patches. Could have at least made it a LITTLE more unique. “

At the end of the day, did I buy anything from this collection? Yes.

I am in a somewhat unique position. I buy Star Wars fashion for myself, it’s what I love and collect, but it also happens to be my job as a fashion blogger (one that I am lucky to be able to do as a stay-at-home mom and wife). While perhaps I play that card a little too often when justifying purchases to myself, I do have a reason to buy Star Wars fashion – to review it, to feature it on the website, and to provide an in-hand, in-person perspective on it. I can’t write about something I don’t buy, right? That’s a slippery slope, let me tell you.

Sometimes I really battle with shopping decisions. As a collector, it’s easy to justify wanting something even if I know I won’t really use it – adult collectors don’t ‘use’ Star Wars toys, they sit on a shelf on ‘display’. That doesn’t take away any of the enjoyment of owning it, but then again, action figures cost a lot less than handbags (not including vintage figures of course), and take up a lot less space on a shelf.

Whenever I buy something, I try to honestly answer a few questions –

When it came to the Coach x Star Wars collection, I did get a little caught up in the hype – exaggerated by the ‘secret sale’ format with a countdown clock and massive markdowns. Living in NZ, I slept through the launch, and woke up panicked when I saw a few styles had already sold out. I scrolled through the range, and quickly picked out the bag styles and print designs I liked the best. It was a rather overwhelming prospect to do in a hurry!

I’m sure I’ll still want my bag in six months, and next year, and beyond – I just love handbags, and enjoy collecting them. Now, the next question – do I just want it because it’s popular? Honestly, this is where things get fuzzy. Designer bags combined with Star Wars? Of course I want them… but I find myself nodding in agreement with many of those Facebook comments. The designs could have been more unique, considering the price point.

If you’re trying to ‘tone down’ Star Wars designs to appeal to a mass market, then what is the point? If you’re not a Star Wars fan, you wouldn’t spend that much on a Star Wars handbag, and if you are a Star Wars fan, well then you appreciate cool references and interesting designs (and more than likely already own an affordable handbag with a Star Wars logo on it).

Overhyped and overpriced? Or delightful and desirable?

Ultimately every fan has to make up their own decisions about their personal style and budget, and at the point of writing this article, the collection is almost completely sold out. Of course, there are quite a few on eBay…

Honestly, the buzz and excitement faded for me after a bit of reflection. Yes, I do love Star Wars handbags, and I did buy a bag from the Coach collection, but when making higher-price purchases, I like the item to feel special. Grabbing something from a range of ninety-nine items, it doesn’t feel particularly special. Perhaps I’ll feel a little different when my bag finally arrives from my mailbox in the US and I get to hold it in person.

Share your thoughts in the comments below – did you buy a Coach x Star Wars bag?