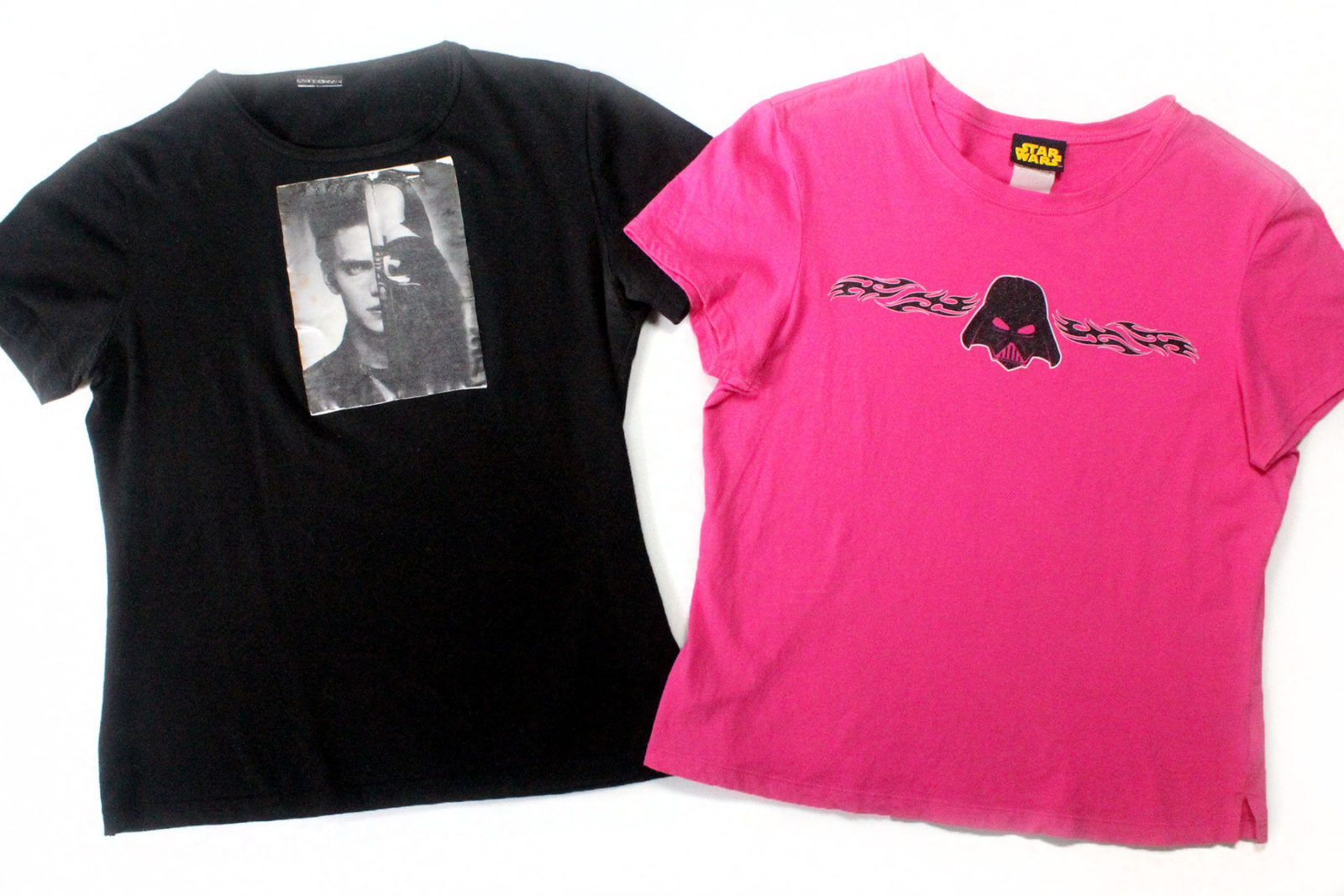 There is one little black Star Wars t-shirt that hangs in the back of my wardrobe, no longer worn – my very first item of women’s Star Wars fashion, that I made myself. I didn’t know it at the time, but it was the start of my journey of collecting Star Wars fashion.

My first convention experience was Armageddon Expo, held in my home city of Auckland in April 2003, with R2-D2 actor/peformer Kenny Baker among the celebrity guests. I can’t remember exactly what I wore that day, but I know it wasn’t Star Wars – I simply didn’t own any Star Wars fashion at that time. Later that year, the expo was held in Wellington – with David Prowse and Peter Mayhew attending. I decided enough was enough, I needed a cool Star Wars t-shirt to wear to the event this time. Of course, this was New Zealand in 2003 – there was absolutely no women’s Star Wars fashion available locally. So, if I couldn’t buy a women’s Star Wars t-shirt, I would have to make one.

I bought a iron-on transfer kit for black t-shirts, and found an image online combining Anakin Skywalker and Darth Vader (I was/am a big Anakin Skywalker fan, of course). I picked up a women’s black t-shirt at a local store, and quickly turned it into a Star Wars t-shirt. I proudly wore it to the convention, and it soon became a a regular part of my everyday wardrobe. 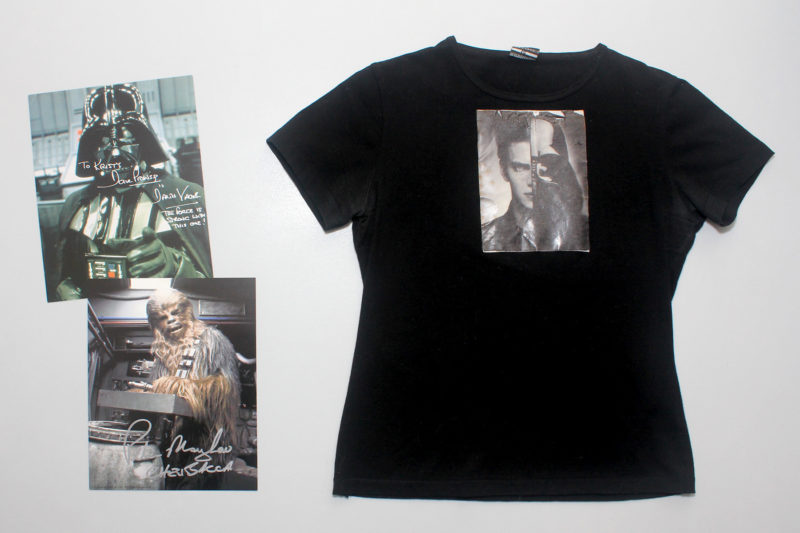 As you can see, my home made t-shirt didn’t survive the constant wear and washing, and the image eventually peeled off in many places. Thankfully, a few months later the official StarWarsShop.com opened on March 10th, 2004 – they shipped internationally, and stocked a small selection of women’s Star Wars t-shirts! I was so excited – I could finally have choices in my Star Wars wardrobe! 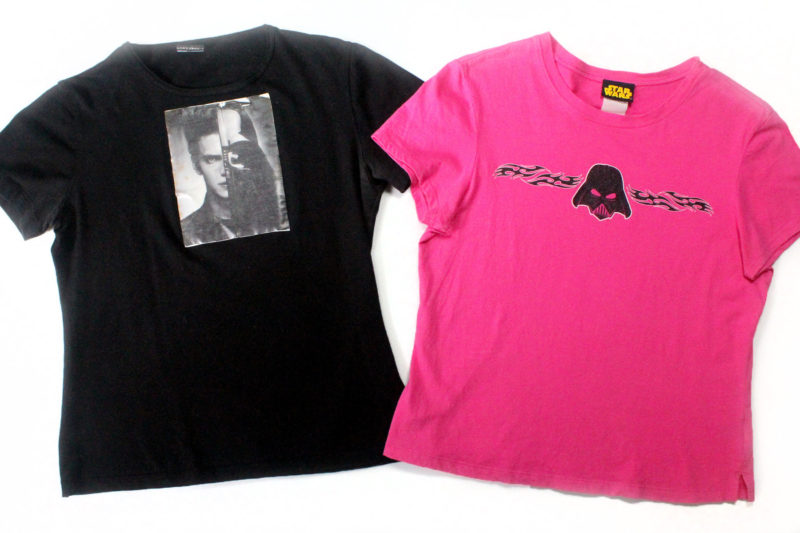 My first purchases included a pink Darth Vader t-shirt (pink! I’d never find that in the boy’s section), a Clone Wars Micro Series Yoda t-shirt with a ‘fluffy’ print, and a Princess Leia t-shirt with glitter details. The combination of flattering babydoll cut and fun Star Wars prints was fantastic – I really wish they had made more in that style.

The fabric used for the two black babydoll t-shirts is slightly thicker than regular t-shirt fabric, and much stretchier, so they can be worn more fitted. It is not common to find this style of women’s t-shirt used for Star Wars apparel – so many of women’s t-shirts available today are just smaller versions of men’s, with very little shape through the waist. 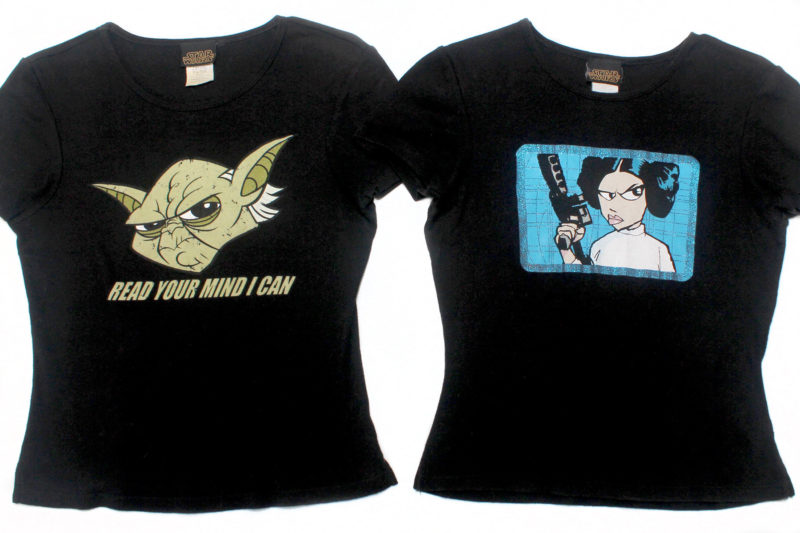 Sadly, StarWarsShop eventually closed down on July 18th 2011 – I will always remember it fondly. I bought my first official Star Wars apparel from the website, and I also purchased my very first Her Universe items via StarWarsShop, as they shipped internationally, and Her Universe unfortunately does not.

My eyes had been opened to the world of women’s Star Wars apparel – it did exist, and it wasn’t just smaller versions of men’s clothing. It could have glitter, it could be pink, it was fitted for a woman’s shape – it was like magic! I could finally combine my love of fashion and Star Wars collecting together, and I’ve been hooked ever since. 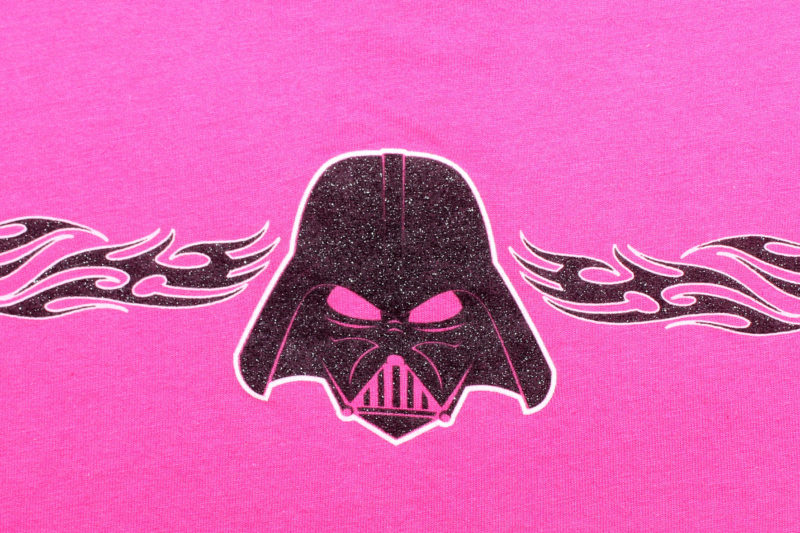 While I have always wanted more women’s Star Wars fashion available internationally, it was the lack of options that inspired my first adventure in creating my own custom Star Wars apparel. Do you have a similar story? 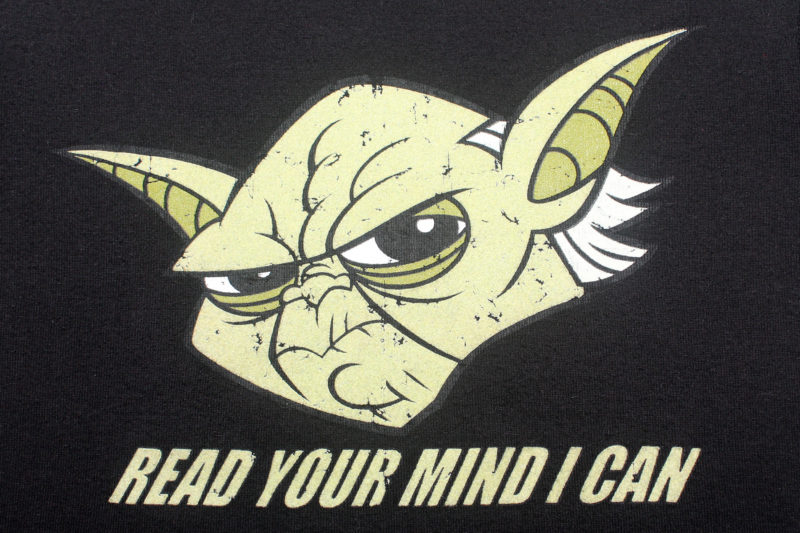 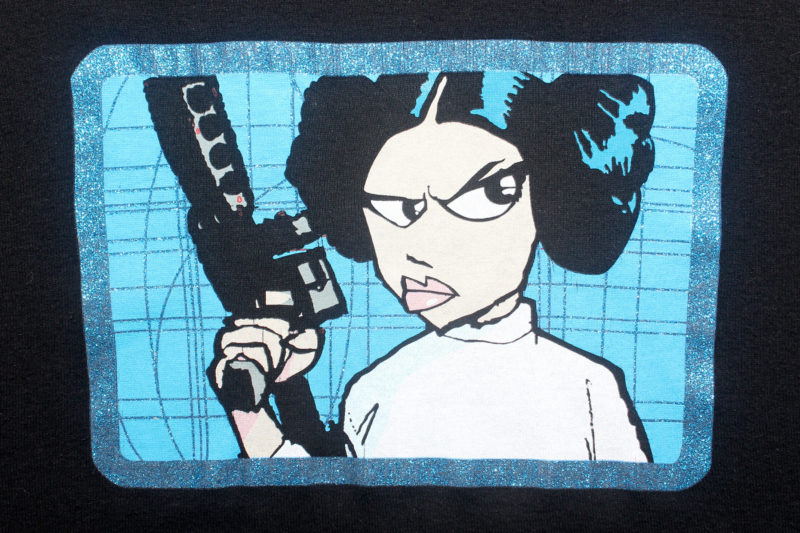