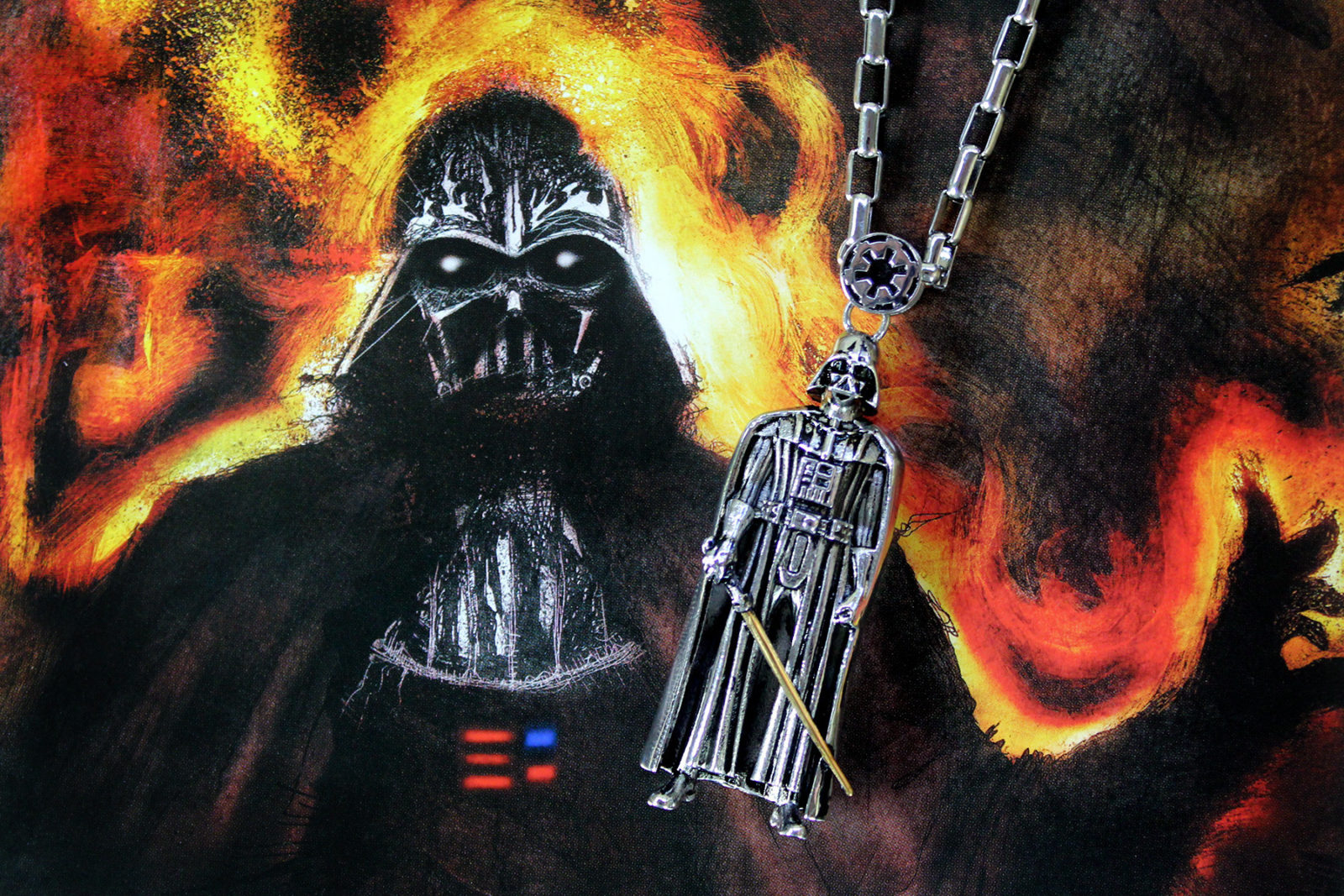 Today’s review features the ‘Shadow Series’ stainless steel Darth Vader necklace made by Han Cholo. It is no secret that I am a huge fan of Han Cholo jewelry, their designs always show a love of the source material, dramatically mixed with their signature rock n’ roll style. Han Cholo jewelry celebrates popular characters and items from the saga, with finely detailed sculpts and just the right amount of badass attitude.

Just for The Kessel Runway readers, get 20% off the fantastic Han Cholo Darth Vader and Han in Carbonite stainless steel necklaces with the discount code ‘KESSELRUN’ (code valid until 31st December 2016). Han Cholo can ship worldwide, which is great. 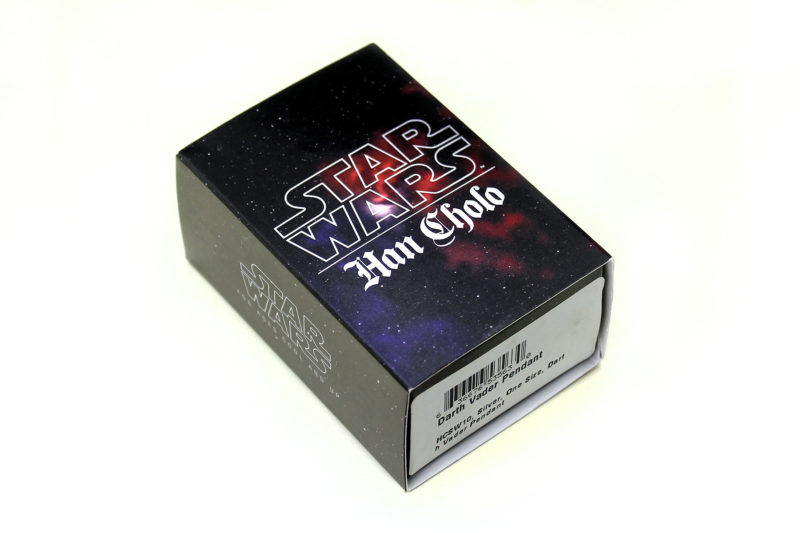 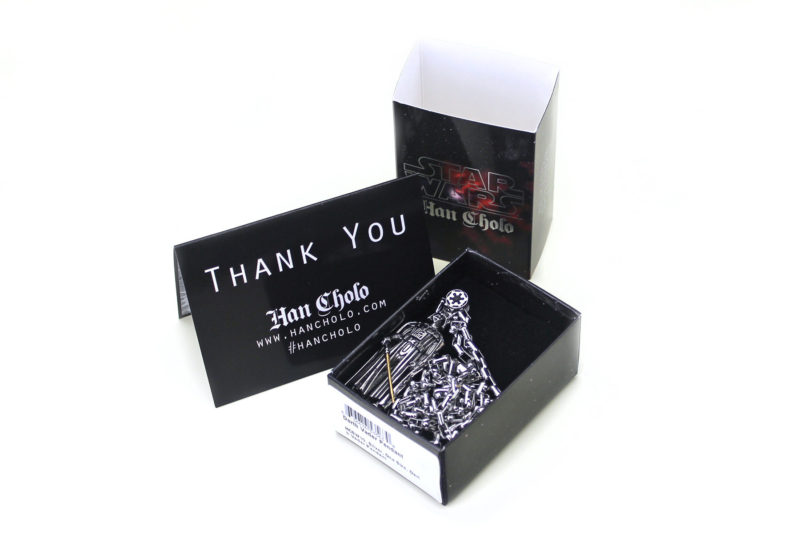 The Darth Vader pendant comes packaged in a ‘drawer-style’ black gift box, which features an all-over starry sky background, with the Star Wars and Han Cholo logos embossed in silver on the front. The back of the box has smaller logos printed in white, this time with website addresses, together with the Disney logo and the text ‘For Ages Cool And Up’. The pendant sits on a foam square inside the box (the foam has a black velvet top layer), with the rest of the chain length tucked behind. 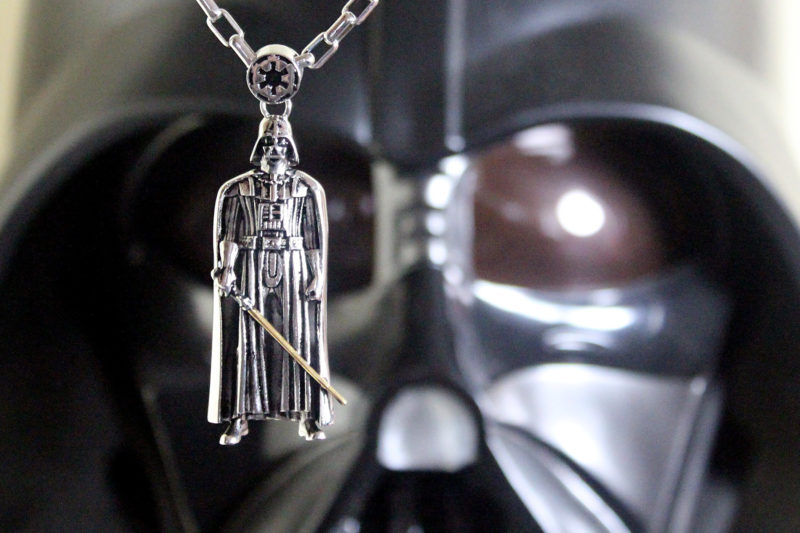 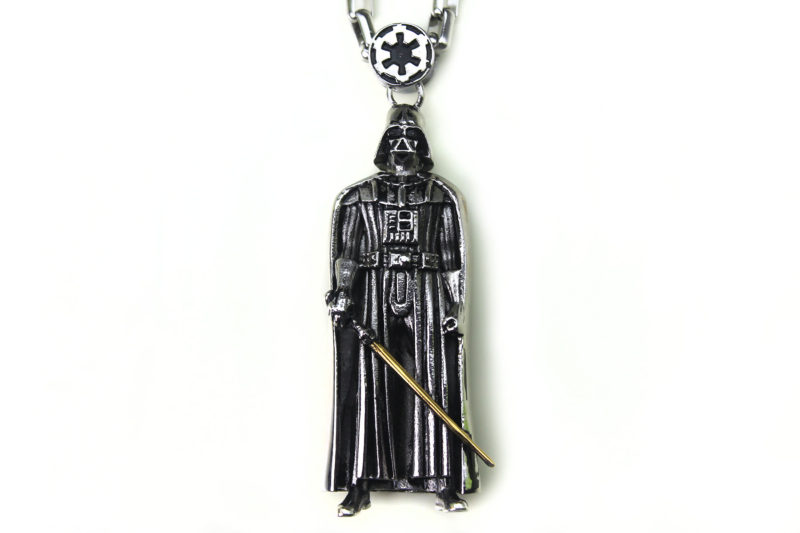 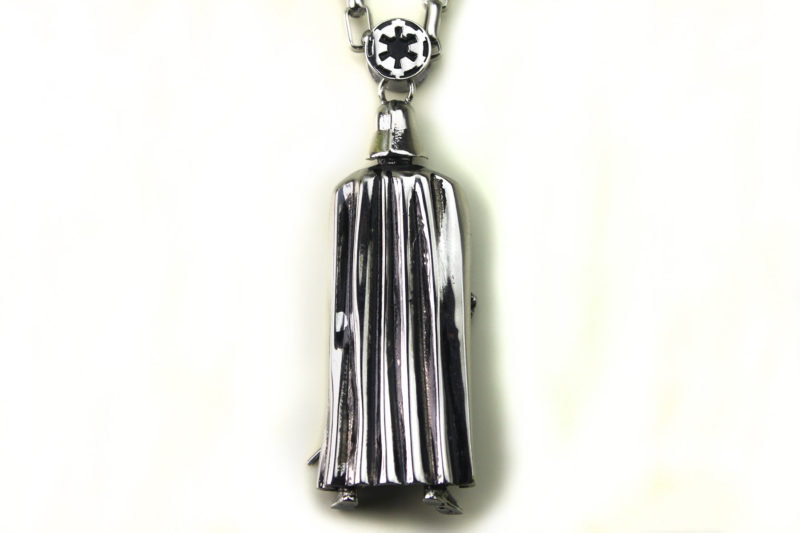 The pendant measures approximately 57mm tall, and 25mm across (at the widest part). It is a solid pendant, not hollow, so it has a bit of weight to it. This works well with the ‘chunkier’ style of Han Cholo jewelry, and is quite comfortable to wear. Darth Vader’s looming height and partially robotic body would of course be very heavy in reality, so the weight of the pendant adds a bit of that physical presence to the necklace design. 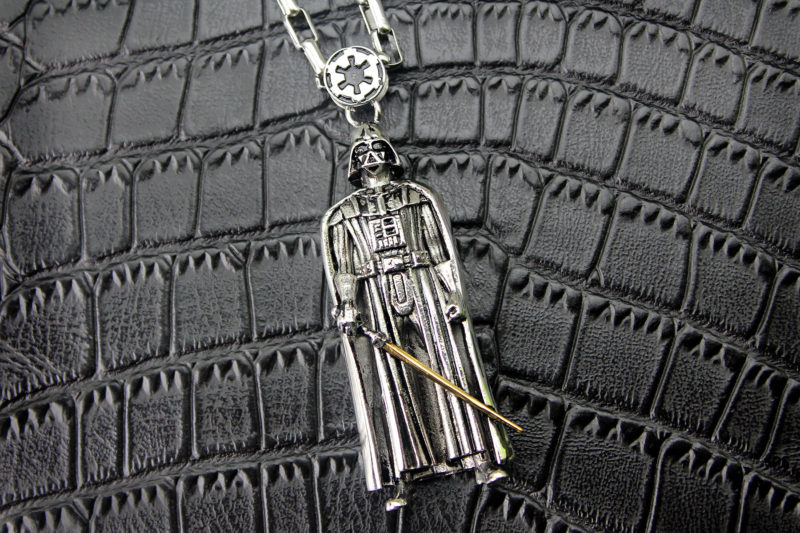 The Darth Vader necklace features gold vermeil plating on the lightsaber blade, which really adds a point of interest. We think of lightsabers as glowing, standing out against the dark, so having a gold coating really defines the blade against the rest of the pendant. The end of the lightsaber blade extends past the main body, but the tip is rounded, so it won’t cut. I probably wouldn’t wear this with delicate fabrics like lace, but then a necklace like this looks best as part of an outfit with a little attitude. This isn’t a dainty necklace! 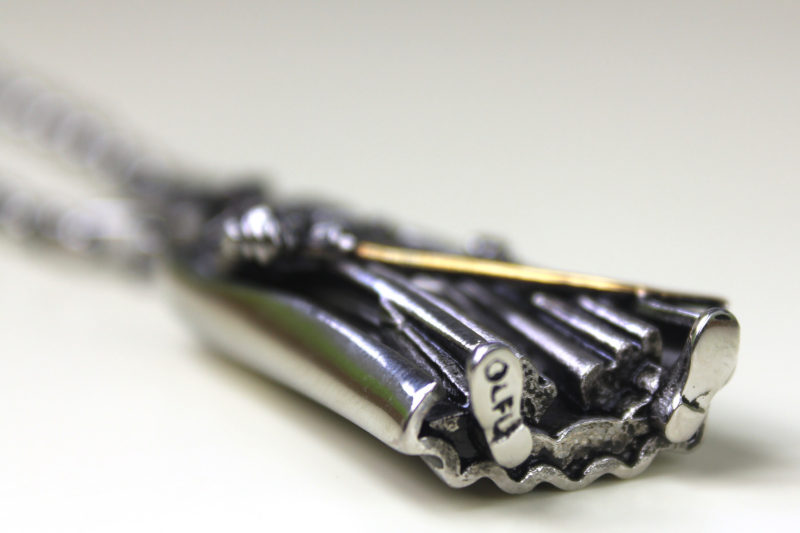 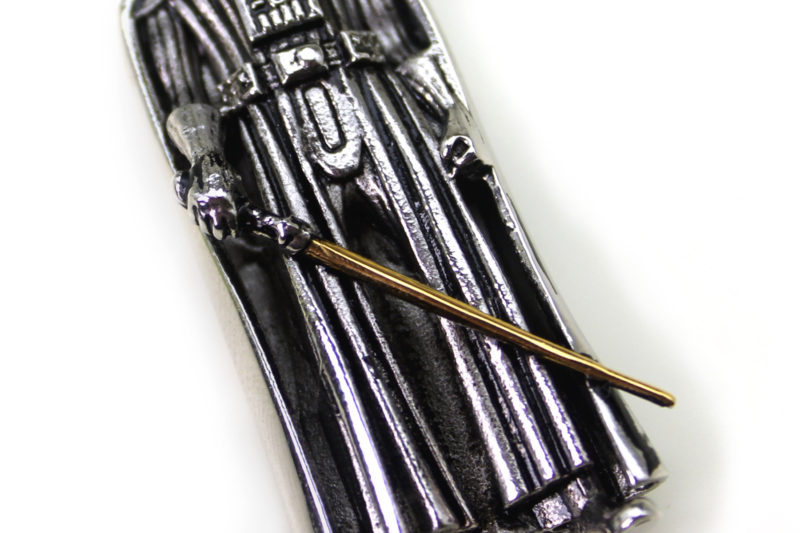 The underside of the right boot features the standard LFL copyright mark, noting this is a licensed item. I think it’s important to note that there are no flat or filled in areas, the sculpt goes all the way around. No short cuts here – there are hollows around the legs, arms, inner cape and the lightsaber blade. Having a basic understanding of molding techniques, I’m really impressed to see a fine detailed piece with so many undercuts and recesses! 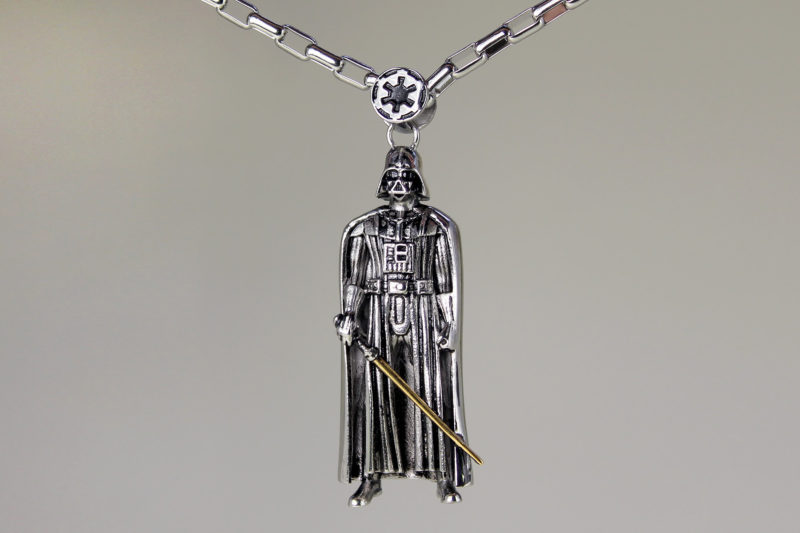 The chain itself is quite unique, with rectangular links – Han Cholo uses this style throughout their Star Wars jewelry collection. At 30″ in length, I can put it on over my head without undoing the clasp. It’s a little longer than most of my other Star Wars necklaces, but the length suits the ‘chunkier’ style of chain. The chain closes with a standard lobster style clasp, with a little tag that features the Han Cholo logo on one side, and the Star Wars logo on the other. 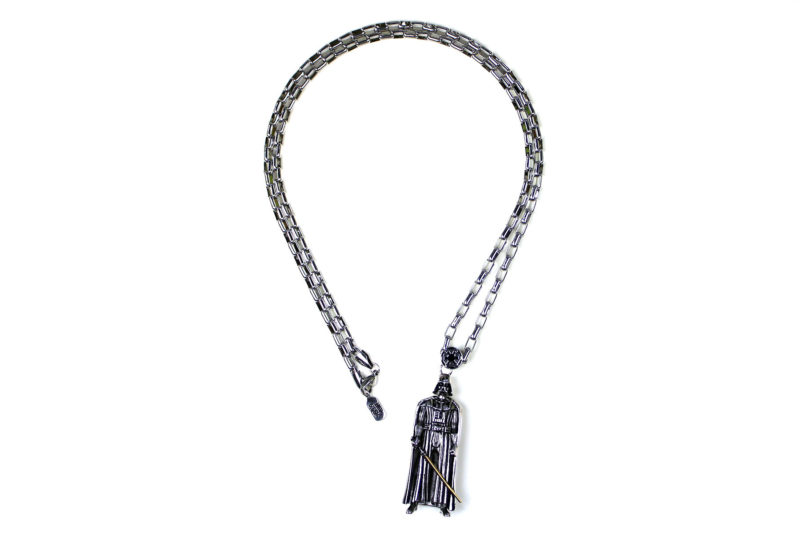 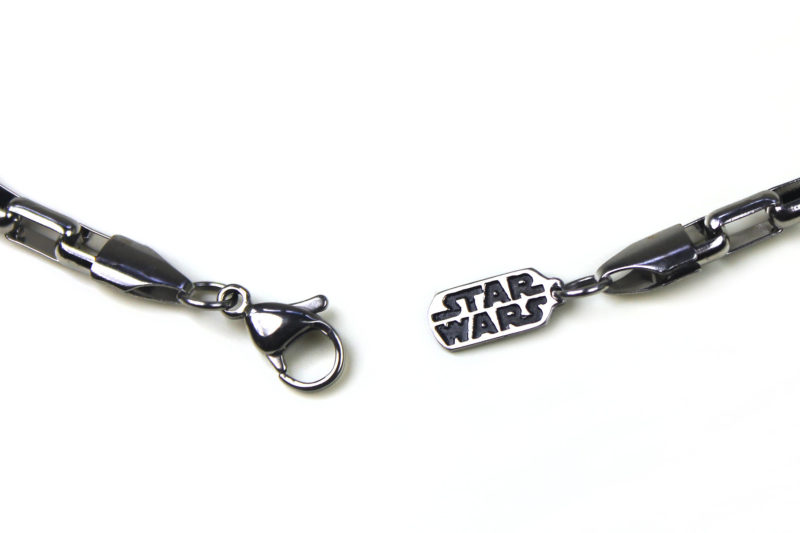 The Darth Vader pendant hangs from the chain by a circular hanger. The pendant hanger features the Imperial ‘cog’ logo on both sides, with black antiquing to accent the design. The hanger measures approximately 9mm across, which is the same size as the other symbol hangers in the Han Cholo x Star Wars necklace range. This is another great example of Han Cholo style and attention to detail – a simple ring would look out of place with the chain design. 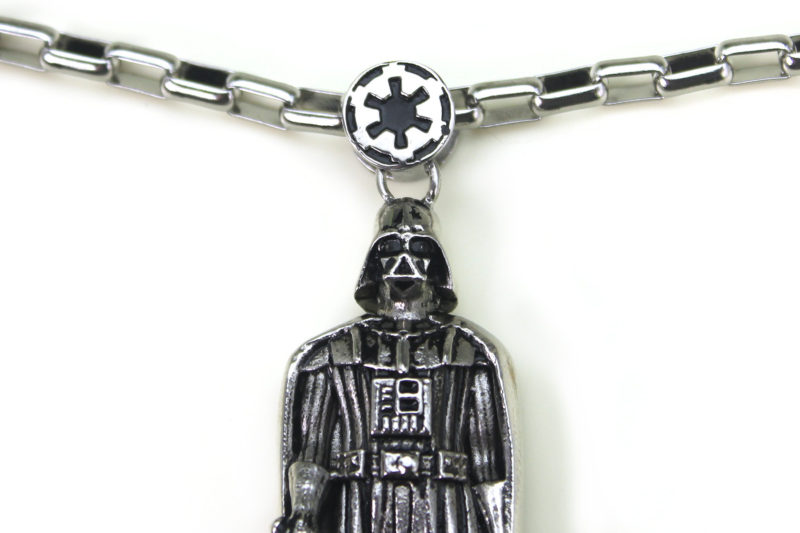 The black antiquing works so well to bring out all the fine detail of the pendant sculpt, all the costume details are there. Although the Darth Vader necklace is made from the same material as other necklaces in the range, it appears darker, which of course ties in another element of the costume design – its ominous colour. The black highlighting is used just enough to give a black effect, without covering up the lovely shine of the stainless steel. It also adds another element to the vintage feel of the pendant, as if it has been worn and loved since the 70’s, and still looks amazing. 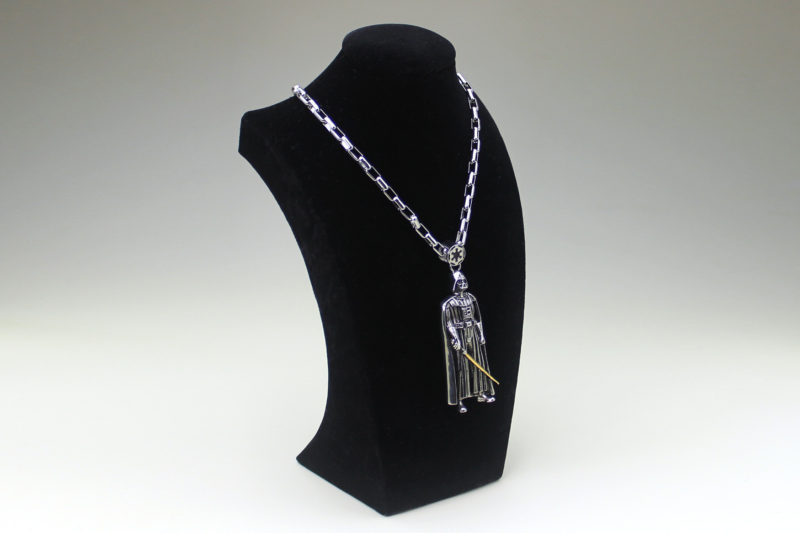 To me, this is a great example of Han Cholo style – the Darth Vader sculpt feels vintage, like something straight out of a classic-era comic book, but with a great rock n’ roll edge to it. This is the sort of jewelry piece that looks amazing paired with black boots and a leather jacket – perfect for a Darth Vader themed outfit. It’s a statement piece, standing out with attitude, and proudly showing your love for Star Wars. 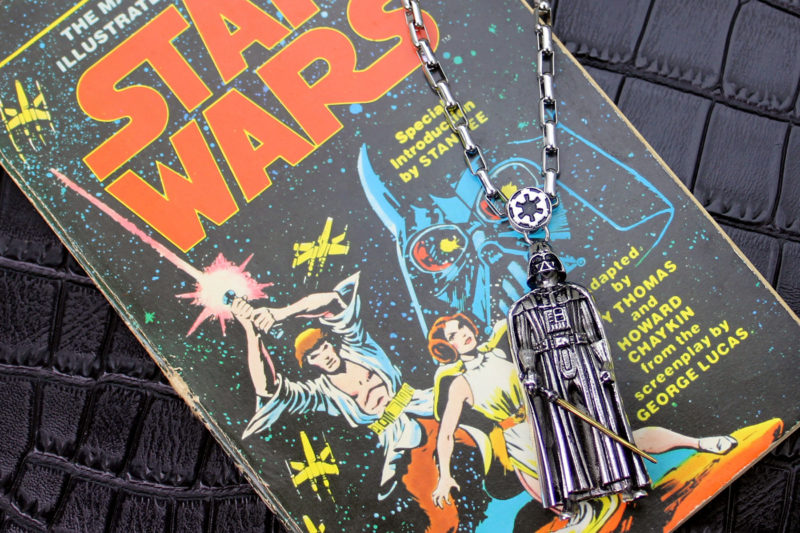 I also own 2 other Han Cholo x Star Wars character necklaces – Stormtrooper and R2-D2. Darth Vader is the largest out of the 3, and with the full cape sculpt, he is also the heaviest. While you probably wouldn’t wear all 3 together (or maybe you would?), I appreciate that they are all in scale with each other – Darth Vader is slightly taller than the Stormtrooper, who is taller than R2-D2. 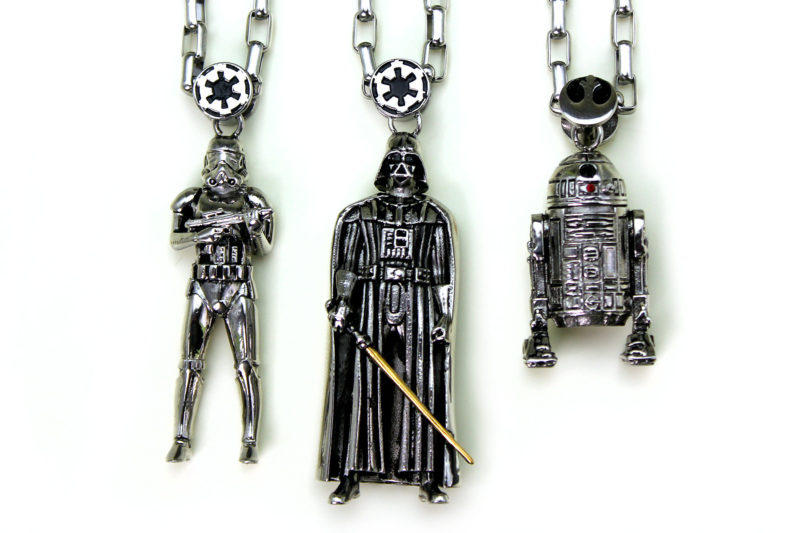 Ever since I first discovered Han Cholo at Celebration Anaheim, I have been in love with their range of Star Wars jewelry. The Darth Vader necklace was one of the first designs they released, and it completely captivated me the moment I saw it. The detail of the sculpt is amazing, especially when viewed up close in person. I love the sculpt and attitude of this Darth Vader necklace, I know I’ll be rocking it with all my favourite Star Wars outfits! 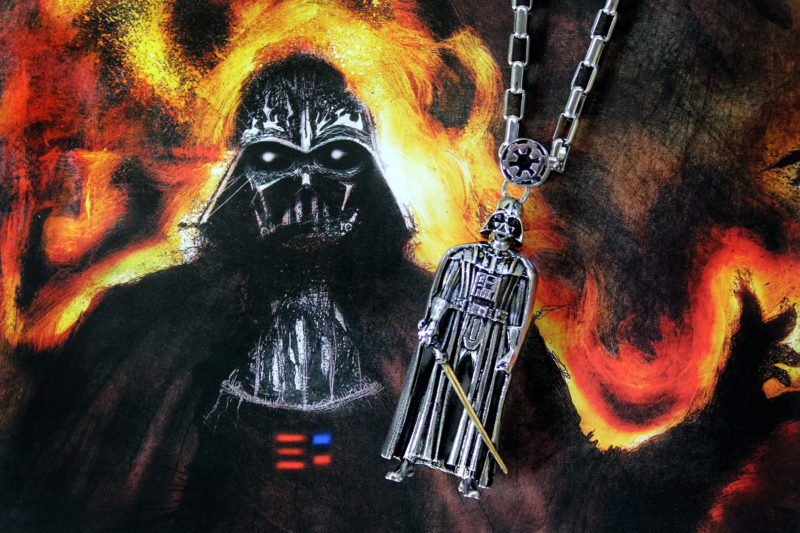 Disclaimer: this item was supplied by Han Cholo for review purposes. The Kessel Runway stands by the position that this, and all of our reviews, are an honest analysis and opinion regardless of whether the merchandise was purchased or supplied by a manufacturer/retailer.