San Diego Comic Con is nearly here, and while Her Universe won’t have any exclusives or new Star Wars items to debut, there is still exciting news – the super popular lightsaber skirt and matching t-shirt will be available! The skirt sold out very quickly after it’s release at Celebration Anaheim, it’s great to see that Her Universe is listening to fans and restocking this fantastic outfit (you can read my skirt review here). This year Her Universe will have two booths at SDCC – but all their Star Wars items will be sold at their booth #2913Q inside the Lucasfilm pavilion (their other licensed products will be sold at booth #1317). I am hoping that all/any restocked items will also be available on-line, so I’ll be keeping a close eye on the Her Universe website.

On July 9th Her Universe will be holding the second annual Her Universe Fashion Show at SDCC. Last year there were three entrants who created Star Wars inspired couture looks, and while there are a smaller number of finalists this year, I am hoping to see Star Wars once again represented on the fashion show runway. Ashley herself will be wearing three couture looks during the show, including one inspired by Princess Leia – I can’t wait to see photos! From the Her Universe blog post –

Her Universe, which is celebrating its 5th anniversary this summer, will be producing the second annual “geek couture” Her Universe Fashion Show with its partner, Hot Topic, for this year’s San Diego Comic-Con. The event, which will offer two winners the opportunity to design a fashion collection with Her Universe for Hot Topic, will be held July 9th, 6pm, at the Manchester Grand Hyatt Hotel in San Diego.

Also on the topic of Her Universe – sale website Zulily has three Her Universe x Star Wars items currently available, in very limited quantities/sizes – check them out here. 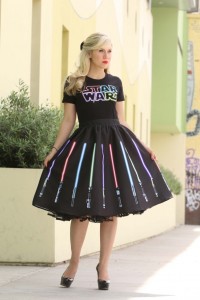 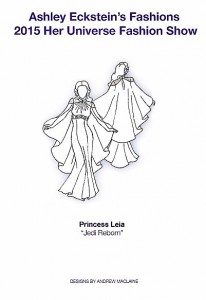