At San Diego Comic Con in July 2014, Her Universe, Hot Topic and Nerdist Industries held the first ever ‘Her Universe Fashion Show’. From the Her Universe blog announcement –

“Geek Couture” has invaded the runways of mainstream fashion shows in New York and London this year, with Star Wars-infused designs by designers Rodarte and Preen. The Her Universe Fashion Show is now bringing geek fashion to its rightful home: the world’s largest celebration of all things geeky, San Diego Comic-Con.

The fashion show featured 36 entrants, each designing and creating their own original couture outfits inspired by a huge range of television series, games and films including Star Wars, Battlestar Galactica and Doctor Who. The Star Wars designs were of course my favourites – made by Caitlin Shindler, Hannah Black (who both picked Padme’ Amidala costumes for inspiration) and Hannah Kent who based her design on Asajj Ventress. See photos of the entrants at the Her Universe blog. All the designs were amazing – congratulations to everyone who entered!

Her Universe founder Ashley Eckstein even joined in, designing and wearing a couture Darth Vader outfit made by Doug Dunnam to promote the fashion event on-line. 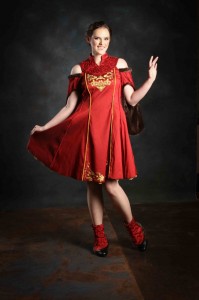 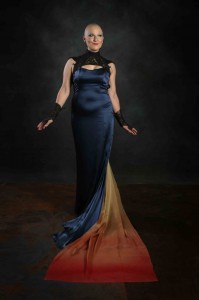 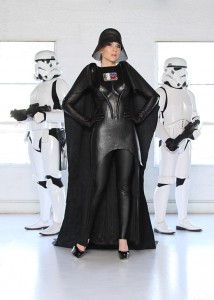