In conjunction with the 10 American designers creating bespoke outfits in partnership with Bloomingdale’s, 10 British designers will also be creating Star Wars inspired outfits to be auctioned for charity. Selfridges will be hosting the collection, with proceeds from the auction going to benefit Great Ormond Street Hospital Children’s Charity, following a special ‘Star Wars: Fashion Finds The Force’ presentation on November 26th at the Old Selfridges Hotel. Max Factor Global Creative Design Director Pat McGrath (who created the looks for the Covergirl x Star Wars advert campaign), will work with the designers to debut a series of make-up looks inspired by Star Wars characters for the presentation. As with the US collection, each inspired look will be made only twice – one for display, and one to be auctioned online (here, starting November 26th)

The 10 British designers include – JW Anderson, Peter Pilotto, Agi & Sam, Bobby Abley, Christopher Raeburn, Claire Barrow, Nasir Mazhar, Phoebe English, Preen by Thornton Bregazzi and Thomas Tait. Alongside the bespoke outfits, each designer has also created a unisex sweatshirt and t-shirt inspired by The Force Awakens, that will be sold exclusively by Selfridges from November 19th, with all profits to be donated to Great Ormond Street Hospital Children’s Charity.

Read more about the collaboration, and view the gallery of designer sweatshirts/t-shirts – Vogue.co.uk – Clashmusic.com 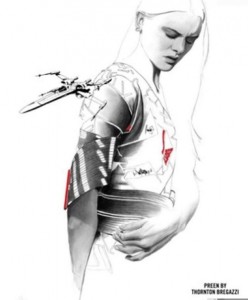 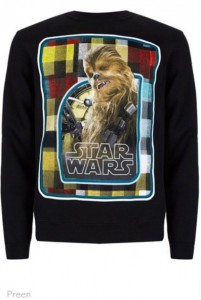 Photos sourced from and belong to Preen By Thornton Bregazzi.