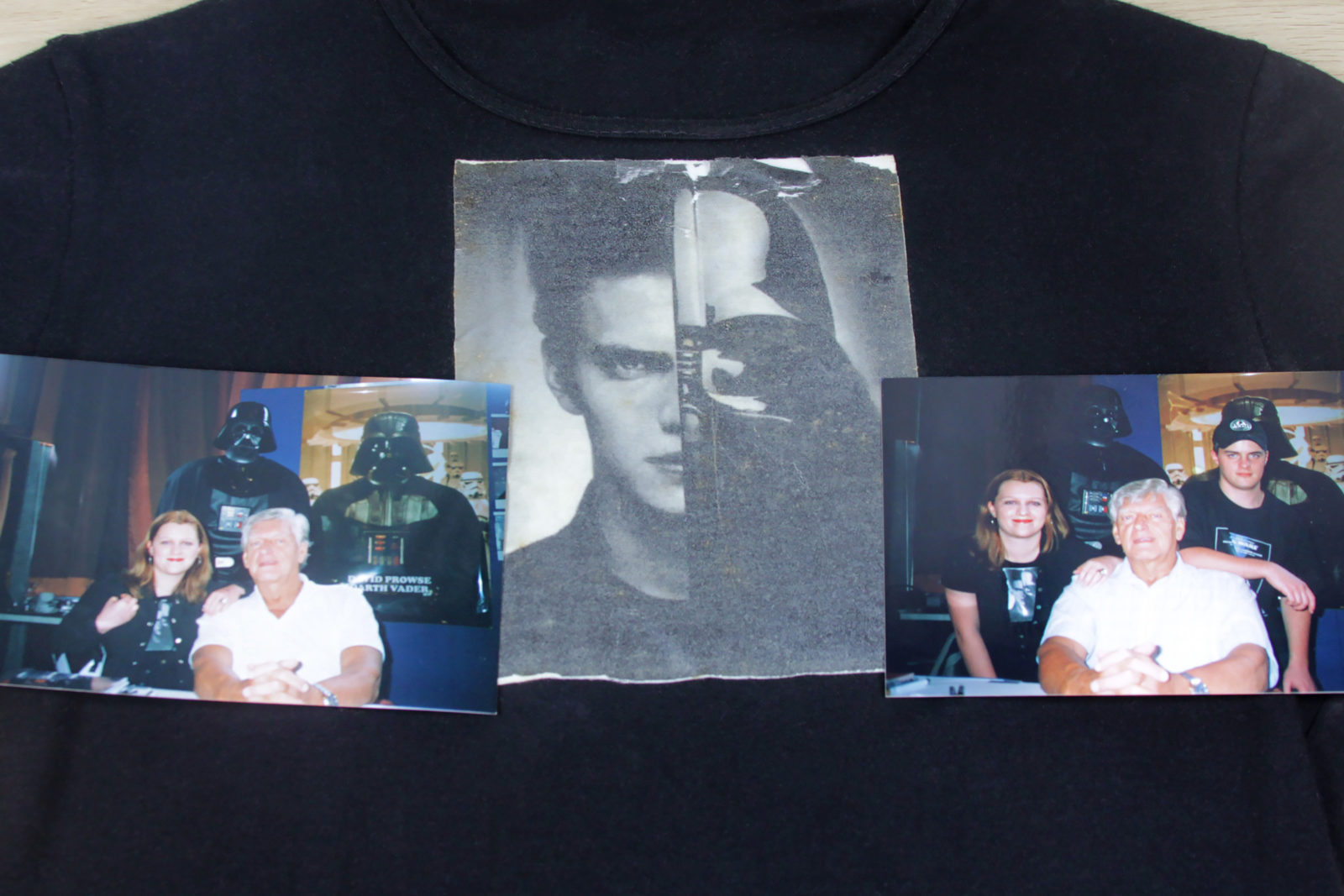 The Star Wars galaxy has lost another great star, David Prowse – the actor who portrayed Darth Vader on set for all three films of the Original Trilogy. My family has such a strong connection to Star Wars, it often feels like loosing a family member when a Star Wars actor passes away.

I have countless items of Star Wars fashion featuring Darth Vader, but my most sentimental is something I made myself.

Back in 2003, David Prowse and Peter Mayhew were announced as guests at the Armageddon Expo in Wellington here in NZ. Wellington is a flight away from where I live, or a rather long drive. Still living at home at the time, my brother and I asked my parents to take us on a family road trip to Wellington, so we could attend the convention – and they said yes.

My brother had a Jedi Knight II: Jedi Outcast t-shirt to wear to the event (the one that came with the game), but I found myself without any Star Wars fashion to wear. Star Wars anything was hard to come by here in NZ back in 2003, so of course there was nothing in the men’s, children’s, or women’s clothing sections. So, determined to have something cool to wear, I made a custom t-shirt myself. I found one of my favourite Star Wars pics from the internet, a cool Anakin/Vader image and printed it out on t-shirt transfer paper. I really wanted a black t-shirt for the Darth Vader theme, so the transfer paper for black fabric had a thick white backing – it was tricky to work with, but it worked!

It was a year before I would get my first digital camera, but thankfully I grew up in a household where photography was a big passion, so I never went anywhere without my trusty film camera. I wasn’t going to travel all that way and not get photos! It was an amazing experience, full of memories I’ll treasure forever.

All these years later, I still have my beloved Anakin/Vader t-shirt, and the photo prints from that convention. The t-shirt print has become a little torn in places, so I don’t wear it anymore – thankfully in the years since there is now an abundance of amazing Star Wars fashion for everyone.

From that day on, I have been collecting Star Wars fashion, determined to never again have that moment of ‘nothing Star Wars to wear’. Over the years, I have tracked down the vintage Star Wars jewelry – and I now have Darth Vader necklaces from Weingeroff (1977), Wallace Berrie (1980), and Adam Joseph (1983) – one from each of the Original Trilogy films. These pieces now take on special meaning, and I will always wear them with fond memories of the time I meet David Prowse – Darth Vader himself.

Thank you David Prowse, for starting off my journey in Star Wars fashion, and for all your incredible contributions to the Star Wars galaxy. You will be greatly missed.