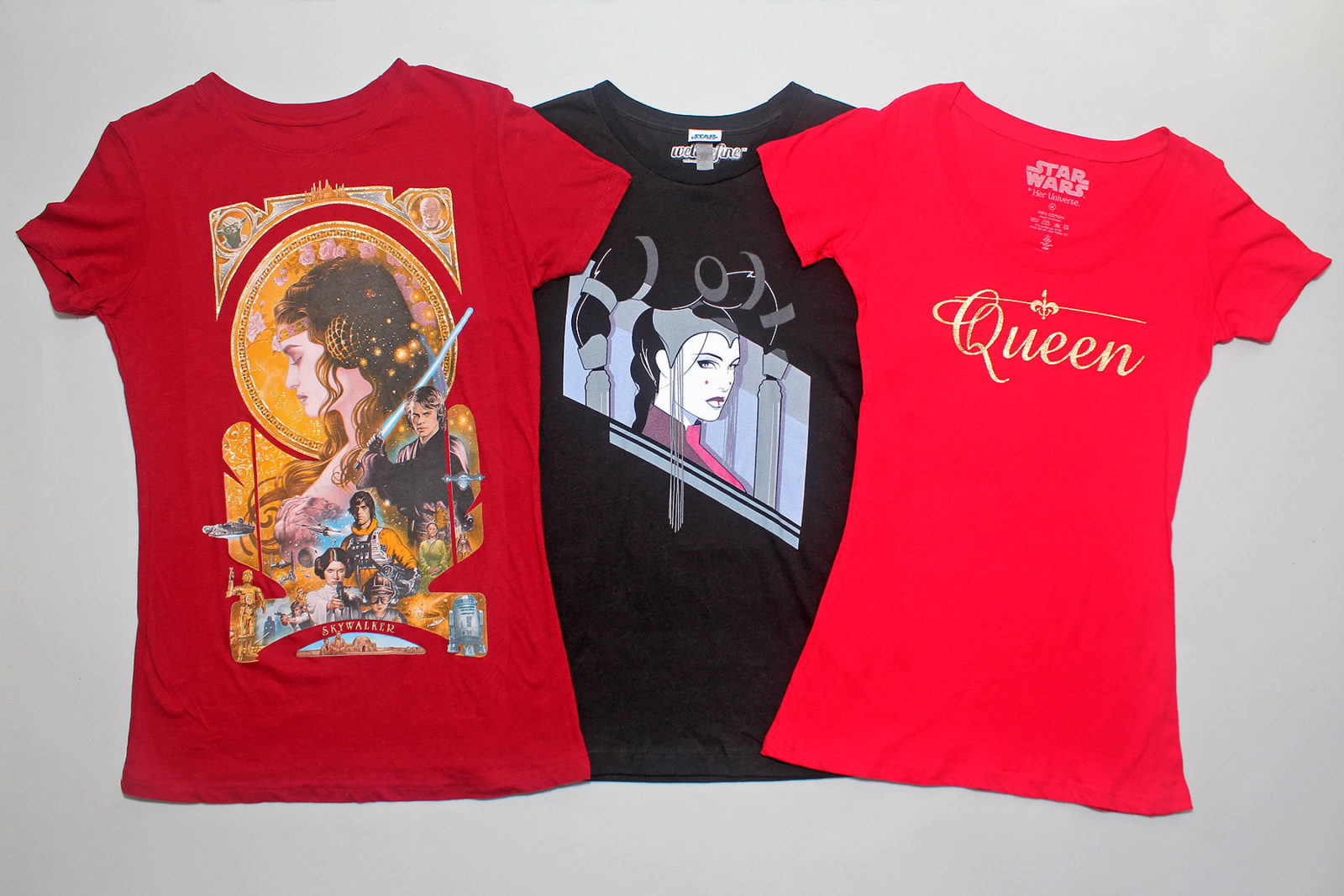 Queen Amidala is synonymous with fashion and make-up, so it really surprises me that she is very rarely used in women’s Star Wars fashion or accessories anymore. As a huge Queen Amidala fan and collector, I have been seeking out related items for my collection for many years – but sadly only a small portion of my wardrobe features Padme’ Amidala. Searching for Padme’-themed women’s Star Wars apparel today brings up almost nothing, which frustrates me on a daily basis. Two of my most prized possessions, the Queen Amidala Tonner dolls, sit pride-of-place amongst my collection, beautiful reminders of her gorgeous outfits. There has been very little Padme’-themed apparel made in the last ten years, despite her being a central character and a huge source of fashion inspiration.

With growing public awareness of female Star Wars fans, I’d love to see more female character representation in women’s Star Wars fashion. Women’s Star Wars apparel has been gathering momentum for a little while now, but much of it still relies on imagery of droids and male characters. The most referenced characters are R2-D2 and Darth Vader – but if there’s one Star Wars character most associated with fashion and cosmetics, it would be Padme’ Amidala. We hear stories of passionate female Star Wars fans choosing Padme’s outfits as inspiration for their wedding gowns – so why can’t we buy Padme’ Amidala-themed dresses? She wears make-up, nail polish, gorgeous gowns – and picks up a blaster and charges in battle to save her planet, of course I want to show my love of her character in my wardrobe! 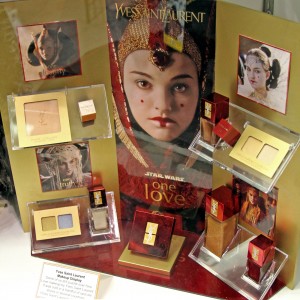 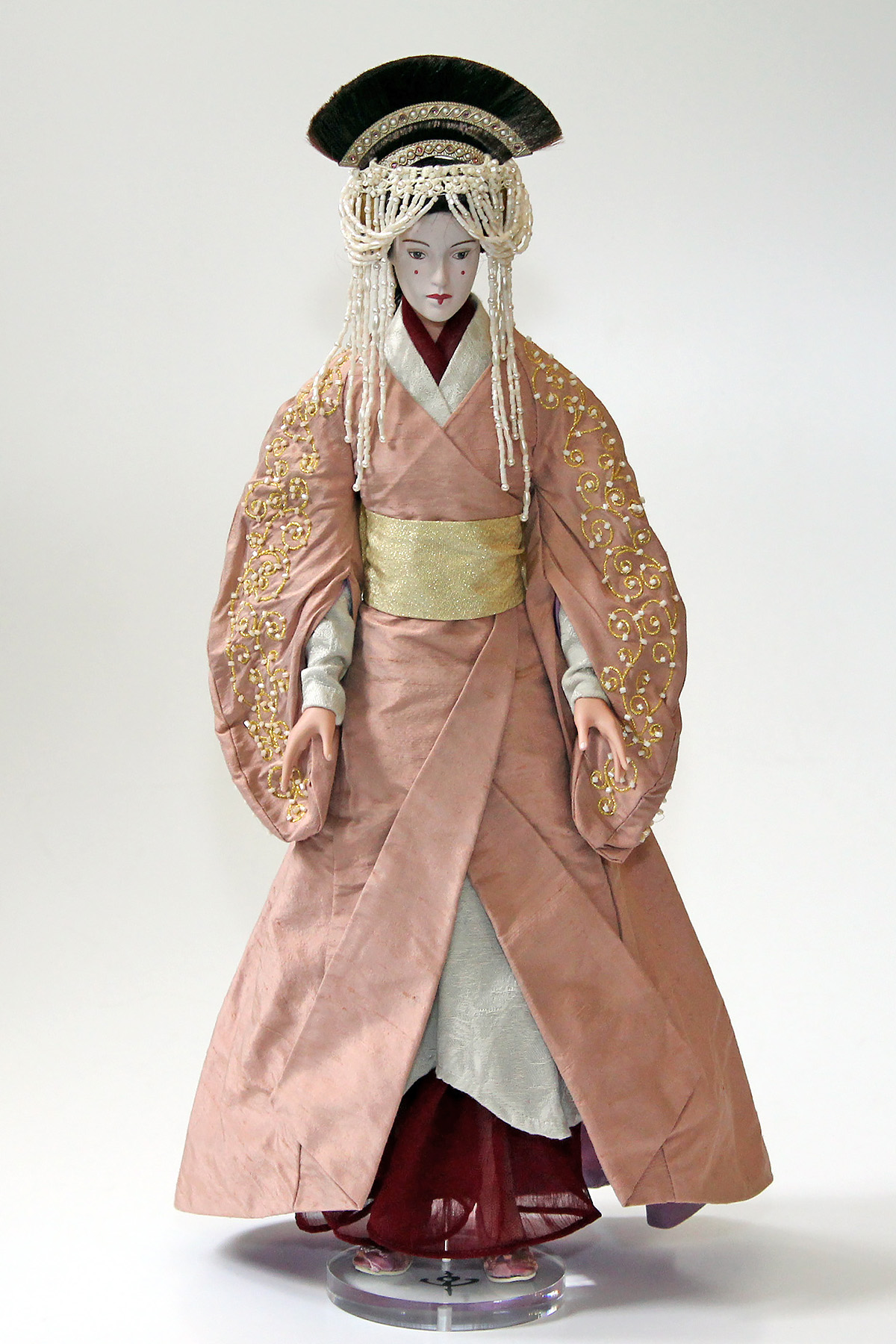 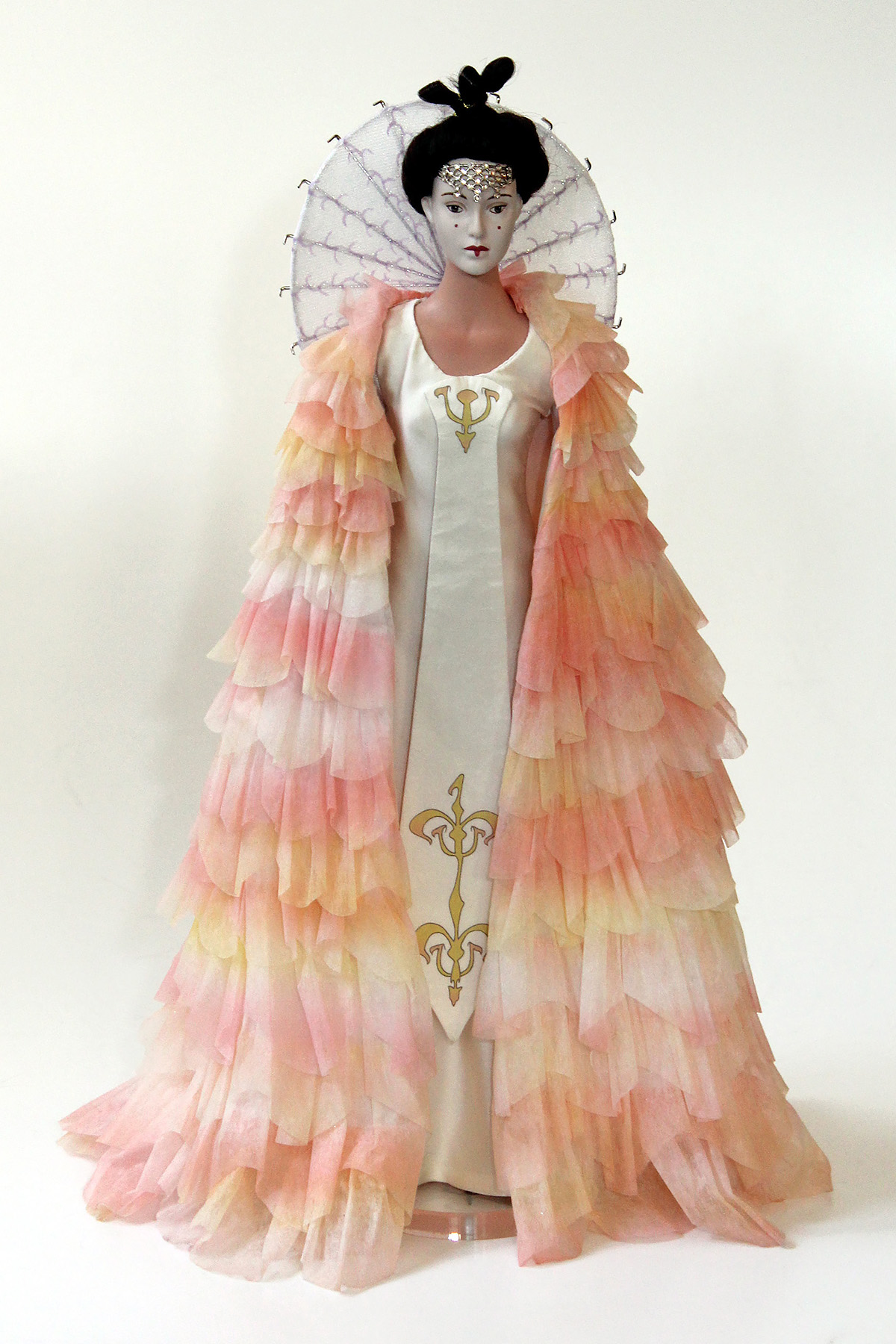 After reading The Boston Globe article about the successful Covergirl x Star Wars cosmetic collection, I was reminded of the earlier Yves Saint Laurent collection released for Episode One. The ‘One Love’ collection was released in 1999, using four of Queen Amidala’s outfits as inspiration for four themed ranges – ‘One Will’, ‘One Dream’, ‘One Truth’, and ‘One Destiny’. The packaging itself did not feature Star Wars imagery/branding, but photos of Queen Amidala appeared on the store displays and press kit (also seen here). Photos are hard to find – most of the information comes from the store display owned by Rancho Obi-Wan (as seen in my photo above, when it was on display at a Celebration convention). Allure Magazine recently sourced more information and images about the collection from the YSL Beaute’ creative director at the time, Terry de Gunzburg – read the full article here. Unfortunately, I do not own any cosmetics from the collection – but I do own the advertising booklet, a special item in my Queen Amidala collection. I am surprised that it took over 14 years for another cosmetic company to create a Star Wars inspired collection – both the YSL and Covergirl collections sold very well, so the demand is obviously there. 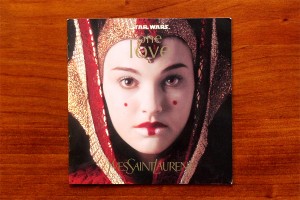 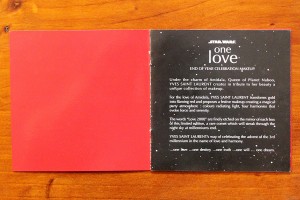 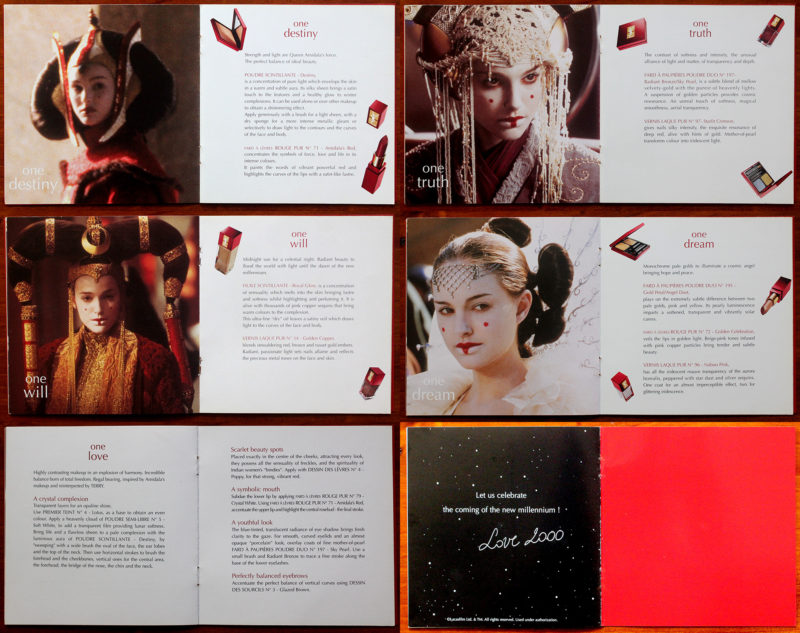 The actress who played Queen Amidala, Natalie Portman, has become quite a style icon herself. Beyond the Star Wars films, Natalie is frequently on the red carpet, on fashion magazine covers, and was even featured as ‘Miss Dior’ in 2015 for the internationally recognised beauty brand. In 2002 she wore a gown by a designer relatively unknown at the time, to the London premier of Episode 2 – the following media coverage helped launch the designer, Zac Posen, who is very well known today for his amazing gowns. Natalie has a Harvard degree, has written two research papers published in scientific journals, and at the age of 30 she won the Golden Globe and the Academy Award for Best Actress – just like her Star Wars character, she is smart, strong, and beautiful. All of her accomplishments add to the appeal of her character in Star Wars – both are women I look up to and admire.

Despite what little has been made in the last ten years, I am happy to see the majority of recent Padme’-inspired fashion has come from Her Universe, with four t-shirts, a tote bag, earrings and charm-

I have two other Padme’ themed licensed t-shirts, as seen below – one is made by We Love Fine (black t-shirt), to celebrate the release of Episode One in 3D in February 2012 (artwork by Craig Drake), while the other is made by Fifth Sun (white t-shirt, artist unknown). Her Universe’s red ‘Queen’ t-shirt is one of my all-time favourite items of Star Wars apparel, and I love the matching goldtone Naboo symbol earrings so much I bought two pairs! Currently, I can only find three options for women’s apparel available that features Padme’ – but why only three? Fans should be spoilt for choice of women’s apparel featuring a central female character! Her Universe’s t-shirt featuring the Tsuneo Sanda artwork used a red t-shirt and gold ink details, which gives it much more of a Padme’ theme than the black t-shirt version from Fifth Sun. 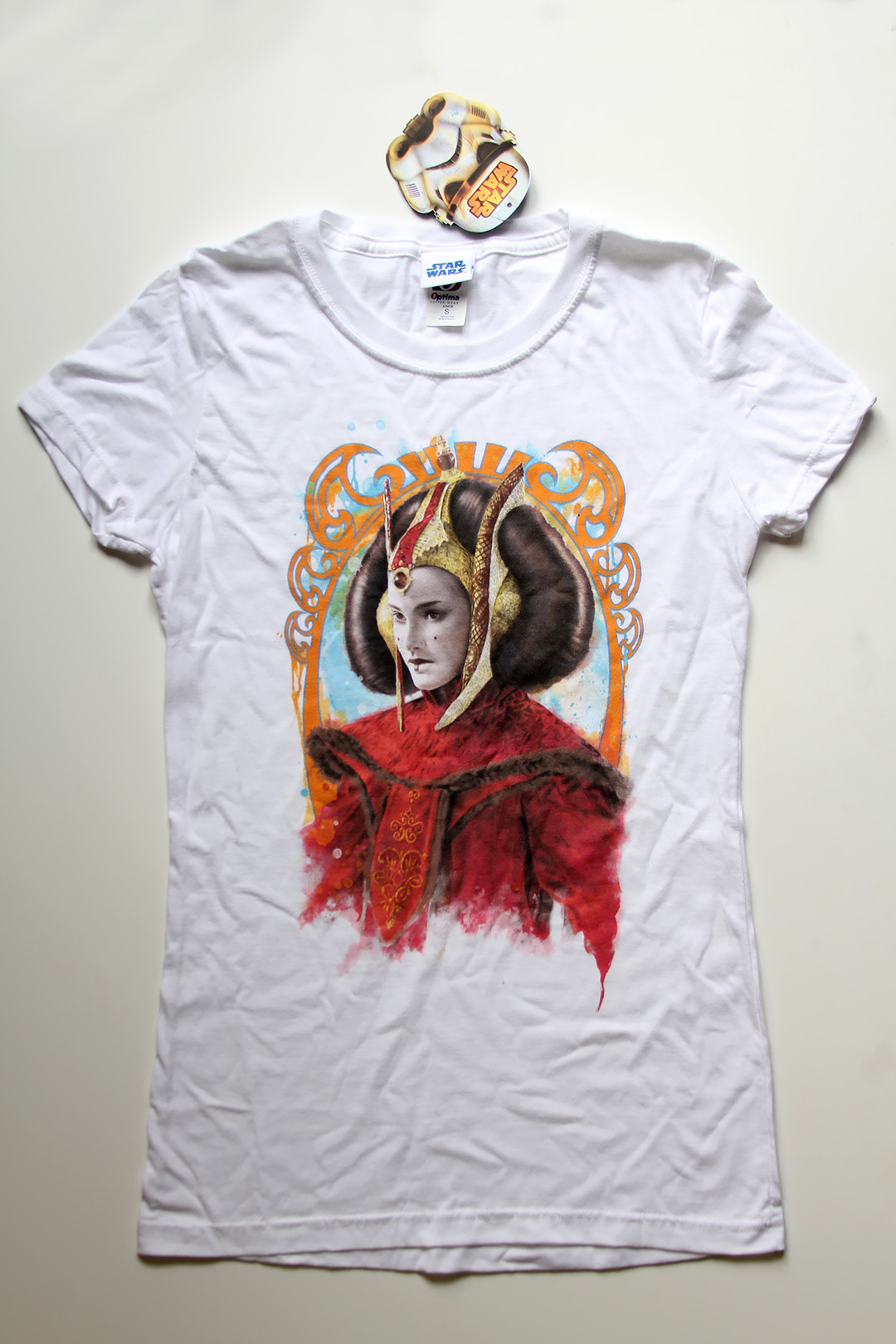 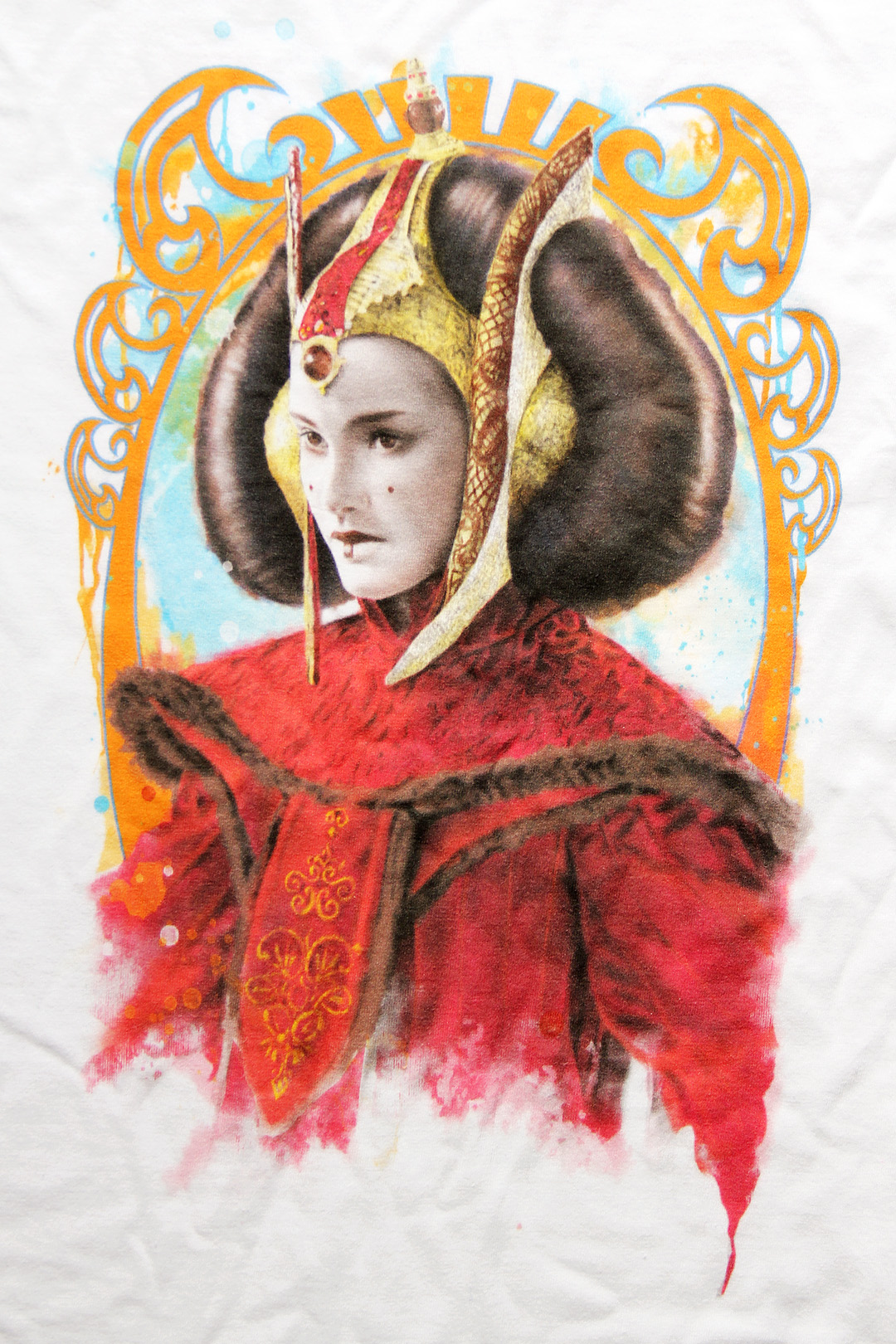 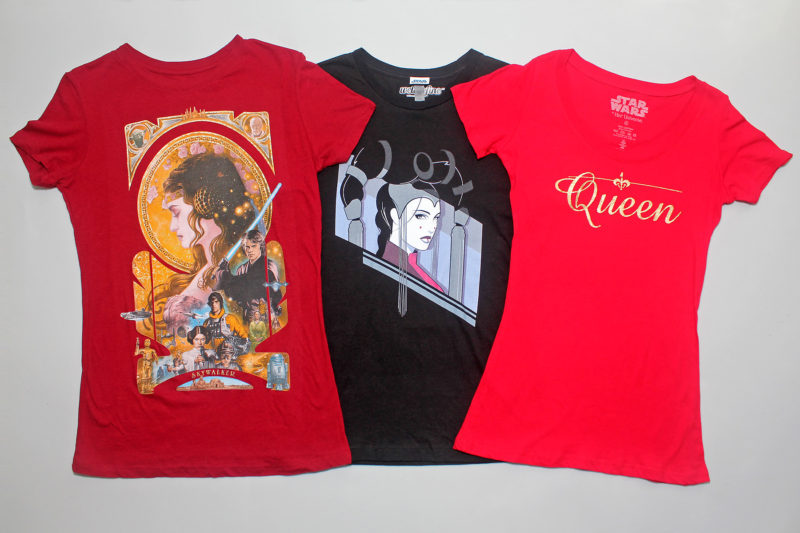 As a Queen Amidala fan, the Naboo symbol is as recognizable for me as any other Star Wars symbol – I really wish it was used more for apparel and accessories. In the Star Wars films we see three women in the elected position of Monarch of Naboo (Amidala, Jamillia, and Apailana), one in the Clone Wars series (Neeyutnee), and one in a comic series (Soruna) – for me, the Naboo symbol represents strong women in Star Wars. Each Queen is accompanied by courageous Royal Handmaidens willing to die (and some do) to protect the queen. We see Sabe’ and Corde’ put their lives on the line by impersonating the Queen to help save her from danger. These women don’t just cater to her wardrobe and make-up requirements (one element of their role), but are also bodyguards trained in marksmanship and self-defence. The Naboo symbol has such a strong female connection – it really surprises me that it is not used more in women’s Star Wars fashion today. 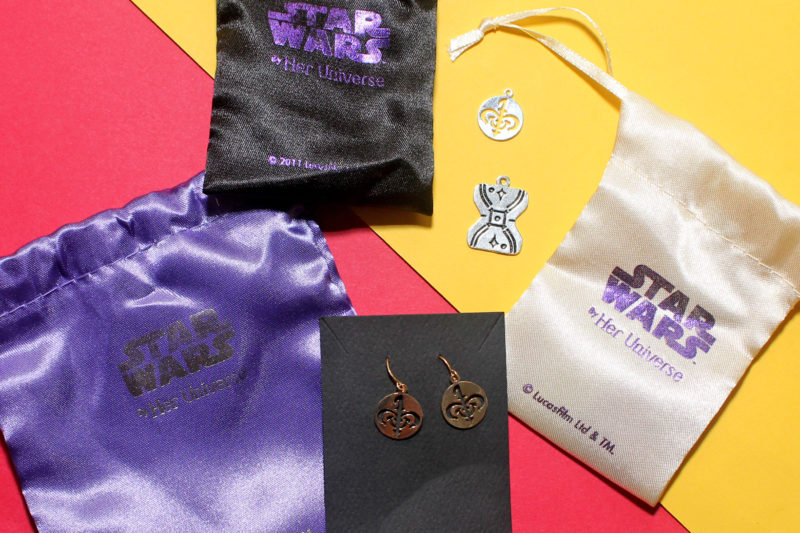 I have often heard the question “What Star Wars related fashion item would you like to see that currently doesn’t exist?” – amongst the desire for more Star Wars footwear for women (what fashion fan doesn’t want more shoes?), is a growing need for more ‘Naboo’ in my wardrobe. Padme’ is the elected queen of her planet, a strong central female character in the Star Wars universe – not to mention quite the style icon herself. It makes complete sense to have real world fashion inspired by her outfits – but instead there is a huge array of male character-inspired apparel, featuring Darth Vader, Boba Fett, Stormtrooper, and so on. R2-D2 is a widely used theme for Star Wars apparel – yet he doesn’t even wear clothes! With an impressive 37 different outfits in the films (even more if you count cape/robe variations), plus more from the cartoon Clone Wars series, there are so many of Padme’ Amidala’s costumes to take inspiration from. My mind goes wild when I start designing a Padme’ inspired outfit – I want her entire wardrobe for my own, and I’m sure I’m not the only Star Wars fan who feels like that too.

One particular dream item I want to see made? A make-up case and brush set – just like Queen Amidala would own. Red with gold accents, with the Naboo symbol used prominently – a make-up case, brush set, mirror, hairbrush, make-up bag, the list could go on! Perfect for storing and using with the Covergirl x Star Wars cosmetics, or any future Star Wars make-up collection – for the Star Wars fan who wants to feel and look glamorous like Naboo royalty. Add a satin nightgown with the Naboo symbol printed in gold, workout gear inspired by Naboo Handmaidens in training, beaded hair accessories inspired by Naboo headdresses… also, I can’t believe there isn’t a ‘japor snipet’ necklace available, it’s a featured item in the Star Wars films – the only licensed jewelry version is the small charm by Her Universe.

I really hope the popularity of the newest strong female character, Rey, will bring more female character representation in women’s Star Wars fashion (she’s already made a good start). In the mean time, I’ll be hand painting the Naboo symbol on everything I can. 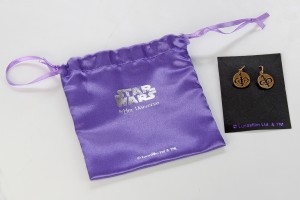 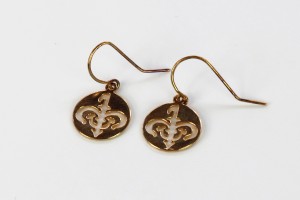