Her Universe mentioned a little while ago about 30 new items coming soon to Disney Parks (Disneyland in Anaheim and Walt Disney World in Orlando, US) – now they have finally arrived! Several of these newly revealed pieces could be glimpsed in an earlier preview photo – but now we have a much better look. I love that Darth Vader Dark Side top!

I do want to say, that as much as I love Her Universe, it continues to be very frustrating that a leader in women’s Star Wars apparel continues to ignore fangirls around the world. I know the licensing agreement means they can’t ship directly outside the US, but having items stocked at Thinkgeek and Hot Topic allows international fans to purchase Her Universe apparel (without the added costs of ordering from Her Universe directly via a mail redirection service). It’s great to see Disney embracing the Her Universe range – but unless you live close (or are lucky enough to be able to visit a US Disney Park regularly), this is yet more fashion that is unattainable for so many of us – especially hard coming very soon after the US-only HSN collection. 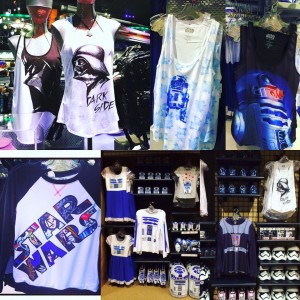 Photo sourced from and belongs to Her Universe.