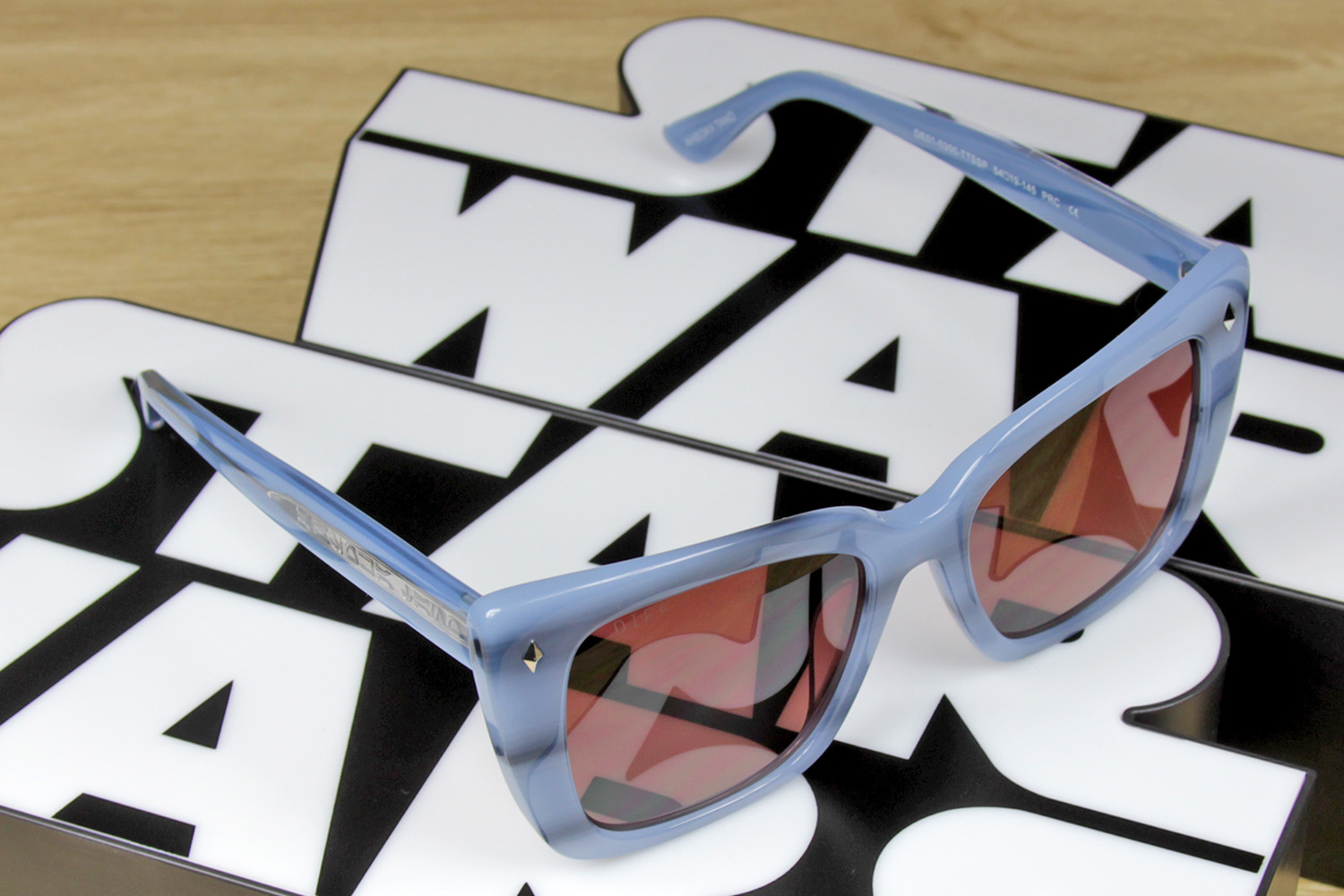 Today’s mail call features the DIFF Eyewear x Star Wars Ahsoka Tano sunglasses. This design is part of the new mini collection inspired by characters from The Mandalorian – alongside Din Djarin and Grogu sunglasses. As much as I love the whole Star Wars range from DIFF, of course I was instantly drawn to the Ahsoka pair. After waiting for what felt like ages, they finally arrived so I unboxed them on camera for an excited first impression look.

The sunglasses are priced at US$124.00 each – DIFF Eyewear can ship internationally.

Check out my full unboxing video –

My poor box came a bit scuffed up, even though the outer mailing box was okay. A bit of a shame, as I do like to keep my Star Wars packaging when I can, but I know that after taking a few review photos this box will live stored away somewhere, so it doesn’t really matter. There was no packaging around this branded box inside the mailer box, so with a lengthy journey via international mail, I can imagine it got a little shaken around and scuffed.

As with the entire DIFF x Star Wars range, these Ahsoka sunglasses came with a special branded trifold case and branded cleaning cloth. The Ahsoka sunglasses are part of DIFF’s The Mandalorian collection, so I am a bit puzzled why the case features Ahsoka’s Clone Wars lightsabers, not her later curved ‘Fulcrum’ lightsabers, that she wields on Corvus when she meets The Mandalorian. The blades pictured on the case are white, which are definitely only seen with her later hilt style. A small detail, that obviously doesn’t affect the sunglasses themselves, but still a curious design choice.

The included cleaning cloth is a nice bonus, and fits neatly inside the case. The black cloth features a white hyperspace design, with the Star Wars and DIFF Eyewear logos.

Now on to the sunglasses themselves. Here is the description from the DIFF website –

Each frame inspired by The Mandalorian™ includes a specialized trifold case & cleaning cloth.

The Aurebesh on the temples actually translates to ‘Ahsoka Tano’, not ‘Ahsoka’ like the website says, but that’s a small note. DIFF also describes the sunglasses as ‘Torgruta™ Tortoise’ – of course Star Wars fans know Ahsoka is a togruta, spelt with one ‘r’ so I think ‘torgruta’ is a new word combining togruta and tortoise, which is kinda clever (rather than it being a typo).

The sunglasses are a fun take on classic tortoiseshell colour, but with a togruta twist. Instead of the usual brown tones, this has blue tones, inspired by Ahsoka’s togruta montrals. While of course Ahsoka’s montrals are blue and white, this subtle blue striping feels like a good balance between the two inspirations.

The sunglasses are made from ‘Handcut Acetate’ which has a nice sturdy-but-light feel. The edge are all rounded, and they are comfortable to wear.

A random note – I love my other DIFF x Star Wars sunglasses, but they are all metal. Sunglasses made of metal have little attachments for the nose pads, which if you have long hair like me, you’ll know how easily this tangles in your hair if you want to wear your sunglasses on top of your head for a bit. Plastic sunglasses like this pair have nose pads sculpted into the design, so there’s nothing to snag. I have a few pairs of plastic Star Wars sunglasses from other brands, but they have large Star Wars printed graphics all over them – which I love, but I know that’s not for everyone. These Ahsoka sunglasses are a great example of how to do Star Wars sunglasses for fans who prefer a subtler design and don’t want sunglasses caught in their hair.

The sunglass arms have a silver-tone metal detail, running down the length on each side. At the temples, the metal panel is engraved with Aurebesh which translates to ‘Ahsoka Tano’. A neat detail that Star Wars fans will recognise, but completely matches with the softer inspiration design. On the front, there is a small metal diamond design at each upper corner, referencing Ahsoka’s headband in The Mandalorian.

The arms close with metal hinges with a good feel – not too tight, not swinging loose.

The sunglasses lenses themselves are described as ‘maroon gradient’. This warn-toned colour references Ahsoka’s orange skin so well, without being too bright or contrasting. A common colour for sunglass lenses, and adds a warm contrast to the cool tones of the frames, which is just perfect for Ahsoka.

It’s hard to see in my photos, but the right lens (right side, when worn) has a very small print of the word ‘DIFF’ across the upper left corner. Also the text ‘Ahsoka Tano’ is printed on the end of the left arm. Not seen when worn, but another neat little detail.

In my unboxing, I did try breathing on the lenses to see if I could see the ‘special breath reveal feature’, but I didn’t spot anything and didn’t want to waste too much trying to see it. After filming, I did eventually get it to work – a Jedi Order symbol appears on the left lens (left when worn). The effect is really quite cool, but it did disappear fast. Studying these glasses up close, I can’t detect anything on the lenses, so it is very cleverly done. I have only worn these indoors, I am yet to wear these sunglasses to the beach for a real road test, so perhaps it will work more easily in a different environment.

I loved these sunglasses the moment I saw them online, and I love them even more in person. A cliché phrase that I know I use pretty often, but it’s true. These sunglasses feel great in the hand, they are comfortable to wear, and have just the right balance of Ahsoka Tano design. I love collecting Star Wars sunglasses, as I never leave the house without sunglasses, and these are definitely one of my favourite pairs already.

I now own four DIFF x Star Wars sunglasses, and I love each one of them. Summer is nearly here in New Zealand, and I’m ready to rock my fave Star Wars fashion on holiday. Now if DIFF could just make Queen Amidala inspired sunglasses, that would be amazing!

May the Force be with you!