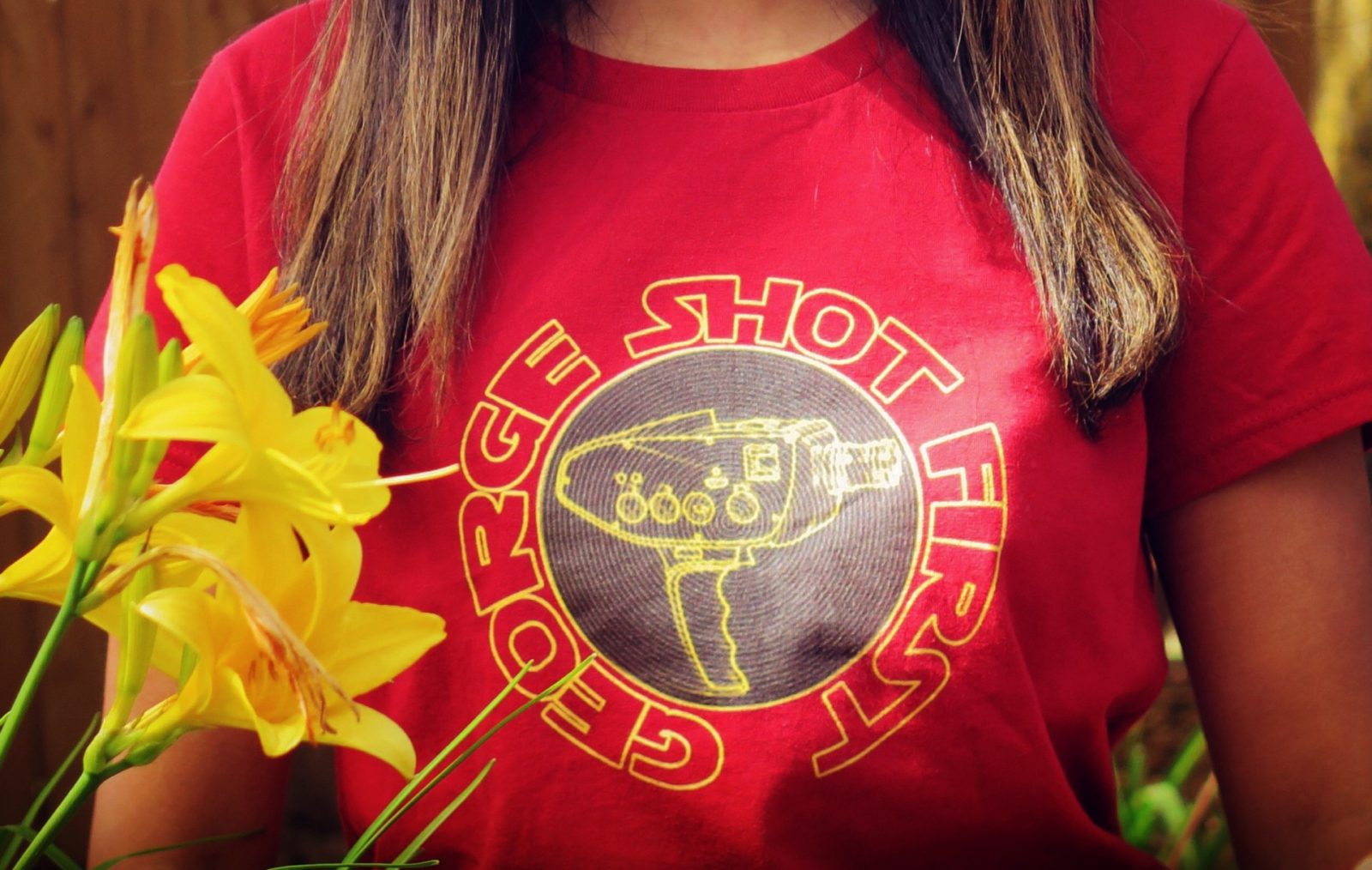 Today’s Mos Eisley Marketplace article features the geek apparel company George Shot First. I first heard about this label through the recent Prequel Appreciation Day fan event, and I love their message of positivity within the Star Wars fan community. They currently have three t-shirt designs, available in women’s styles – each celebrating George Lucas. George Shot First can ship internationally, which is great. 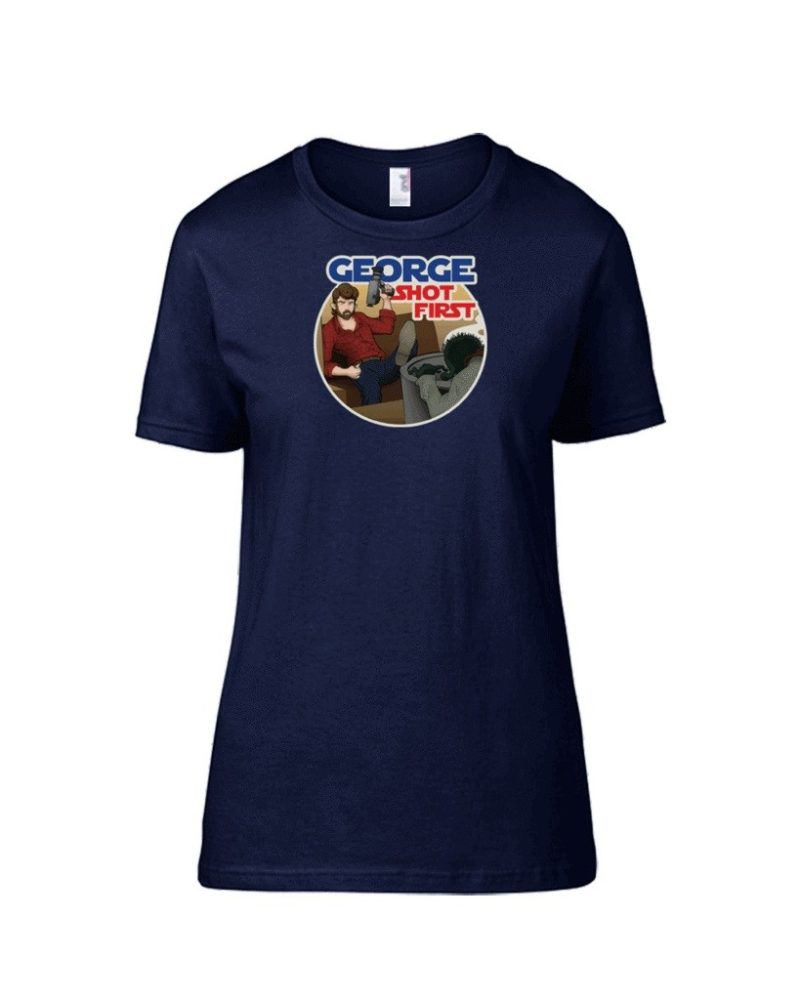 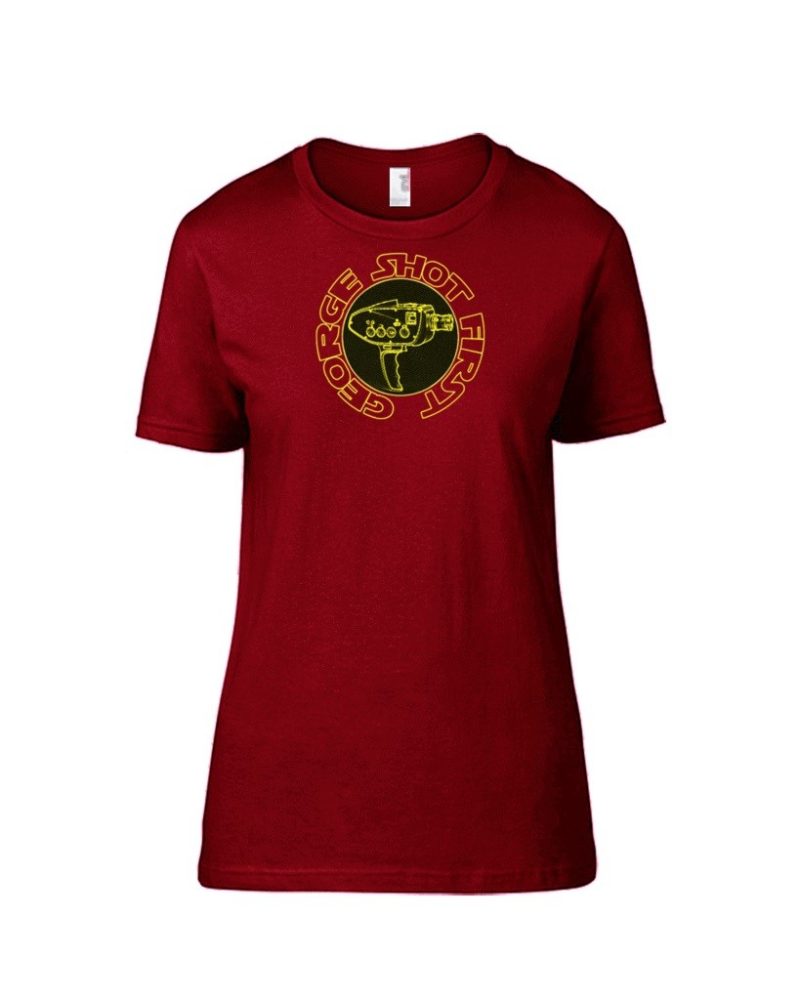 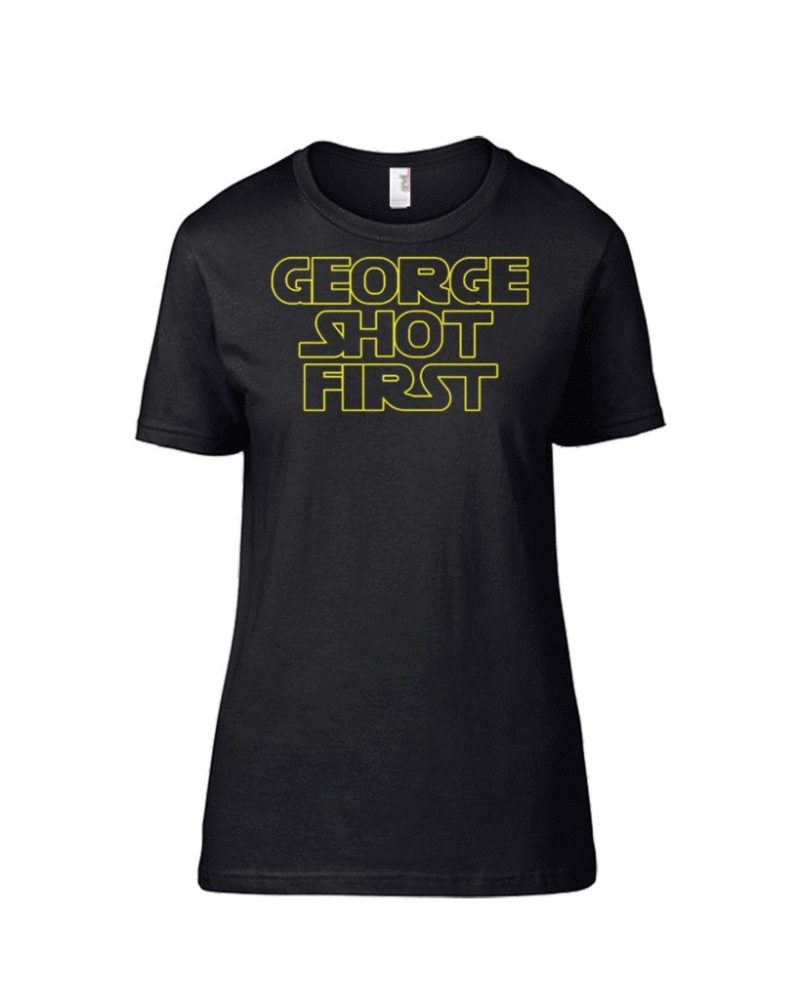 George Shot First is a small but dedicated band of rowdy Rebels who have banded together to fight the forces of anger, fear, and aggression. Writers, designers, artists, and cinephiles, the GSF crew is dedicated to catering to fans of Director George Lucas and encouraging them to flaunt their fandom with unique premium streetwear and T-shirts celebrating The Maker’s legacy. George Shot First isn’t just a company name; it’s also a rallying cry, an attitude and a raison d’être.

I recently had the incredible opportunity to ask George Shot First co-founder Michael O’Connor a few questions about the geek apparel label, and the inspiration behind the company. I’m always excited to see fans creating Star Wars inspired fashion, and it’s great to see George Lucas celebrated by Star Wars fans with a fun reference to the famous cantina scene. Read on for the full interview – and photos of their women’s ‘Camera Blaster’ tee.

When did you first discover Star Wars?

I actually got into Star Wars a little later than most of my peers. I discovered it in sixth grade watching it on a small television screen off a well-worn VHS copy. I fell deeply and madly in love. Soon after, I discovered the Thrawn Trilogy and Jedi Academy Trilogy novels and the comic book series Dark Empire and those sealed my fate. I became a huge fan of Decipher’s SW: Collectible Card Game, memorizing all the minutiae of background character lore, and saw the special editions in theaters when they were released at the end of middle school. The prequels started coming out during my sophomore year in high school and Revenge of the Sith bowed just days after I graduated college. It’s no exaggeration to say that I grew up on Star Wars and it shaped me as much as (or possibly more) than my education. Which is a shame, because I definitely spent WAY more on my education…

What is the philosophy behind ‘George Shot First’?

George Shot First is all about sending a simple message– to the haters, to the uninformed, and to fellow fans. We love Star Wars, and we know the reason that we love it: George Lucas.

As the Internet has grown over the past two decades, we’ve noticed that commentary and discourse has devolved into increasingly more toxic territory. To make matters worse, the prevailing wisdom in the media is that George Lucas is hated by his fans. We honestly don’t believe that, not only because we don’t feel that way, but because we have interacted with so many other fans who feel as we do.

There is a minority of very loud, very hateful people out there who have corrupted the fun of Star Wars with their negativity and animosity. The media has given a bullhorn to these people and goaded them into leveling personal attacks and vicious screeds against a man who should be beloved for creating this wonderful fictional cinematic universe.

We are fighting back not with hate, but with humor and a positive, tongue-in-cheek attitude. We want to strike a contrast with these people, to set ourselves apart and not get dragged down into the same mud pit with them. And we want to represent and connect with other fans who feel as we do. 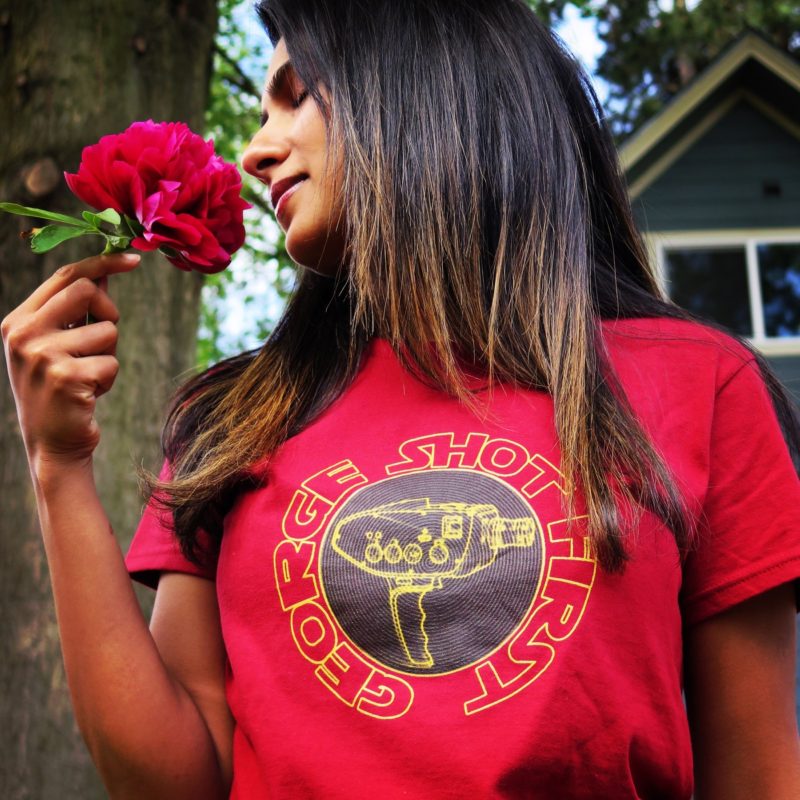 What inspired you to create your apparel line?

I spent a long time in the closet as a Star Wars fan, because when I was growing up and where I lived it wasn’t exactly cool to be the guy who loved science fiction or fantasy or comic books. And then the prequels were released and it felt like it was open season on those of us who enjoyed and admired those films. I was convinced for a long time that myself and a friend of mine were the only people in the world who loved the prequels and respected and appreciated George Lucas’ storytelling talents. It was only after discovering communities online like the Star Wars Prequel Appreciation Society and podcasts like The Force Cast and Rebel Force Radio that I realized I wasn’t alone.

But I also realized that the outside world still had precious few outlets for Saga Fans. I didn’t want to hide behind a computer; I wanted to take my passion and love to the streets and share it with other people, some of whom may not even be huge Star Wars fans. I wanted to show everyday folks what a real Star Wars fan looked like; we’re not all bitter or angry or hateful, shaking our fists at George Lucas for ruining our childhoods.

That’s when the idea of fashion struck me as a way of simply and boldly communicating an idea or emotion. I met up with some other folks who were similarly frustrated by the lack of pro-Lucas, pro-saga, pro-prequel fashion and were far more talented than me in design, art, and fashion-sense. We got together and decided we were going to put our money where our mouths were and start a company. 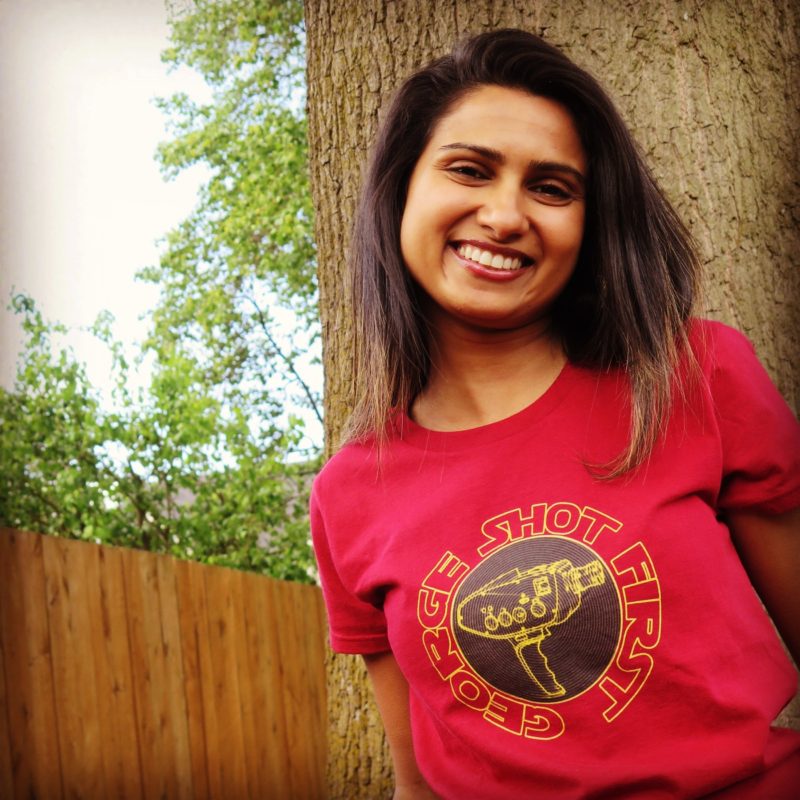 I love seeing fans promoting positivity within the Star Wars community – what is the core message you’d like to convey with your apparel designs?

We are the only apparel company to exclusively cater to fans of George Lucas. That may sound strange when you consider how many different Star Wars clothing companies exist, but we think that what differentiates us is the concentration on The Maker himself. We want to convey our respect and admiration for Mr. Lucas and our communal goodwill and sense of humor towards other fans of not only the Star Wars films, but also Indiana Jones, American Graffiti, THX-1138 and all of the films that George has had some part in crafting, promoting or guiding. We believe in the artist, not just the art, and feel that too often the artist is invisible unless he’s the subject of controversy or scorn. We want to celebrate the artist and also have a little good-natured fun in the process.

What fabrics are used for your printed apparel?

We have all bought t-shirts from geek culture websites that were really cheap– either so light that you could see your skin through them or so heavy and scratchy that you felt like you were making a sacrifice every time you put one on. It was very important to us that we get the balance just right.

So we spent a lot time testing out different fabrics and considered carefully the trade-off between weight, comfort and durability. We did some research, ran some blind tests, conscripted our friends’ unbiased opinions and even then still deliberated for months. In the end, we unanimously decided on Anvil’s blanks. They are so soft and comfortable you’ll forget you’re wearing one, but they hold up to washing machines and rugged, real life and are thick enough to capture and display our printed designs without bleed-through. That’s because they’re made of 100% ringspun cotton, a tighter, stronger weave than cheaper shirts.

We are currently planning to expand our offerings into other avenues of premium streetwear, so we are already looking at other fabrics and materials for those items. I can’t say much more about them as of yet, except to keep a close eye on georgeshotfirst.com in the coming weeks. We intentionally started with a limited number of designs and apparel options, but will be expanding as the year progresses. 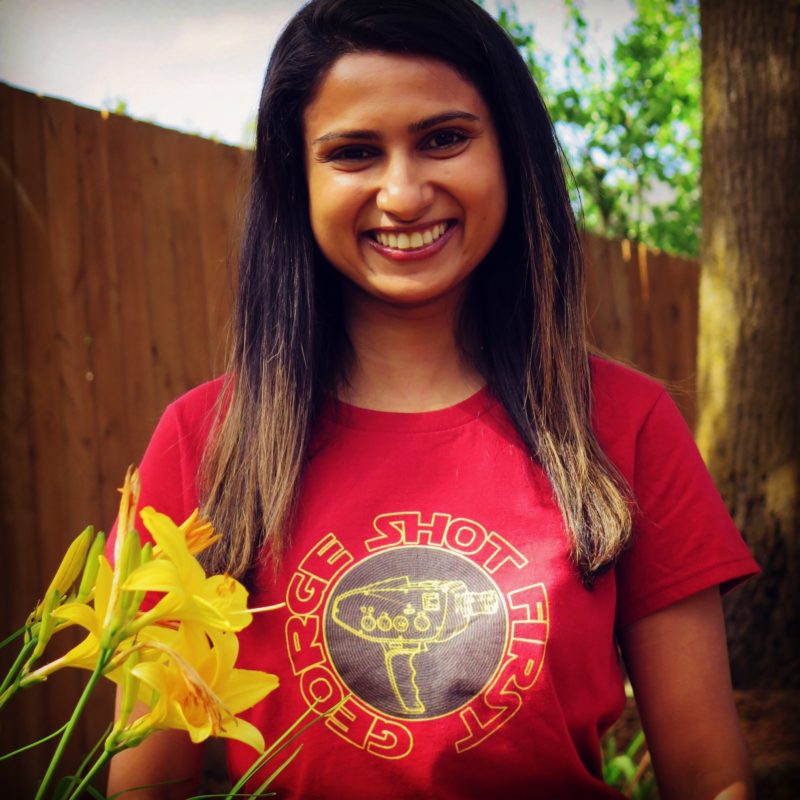 Do you ship worldwide?

We do! At launch, we only shipped domestically and quickly realized that was a terrible idea. Fans of George Lucas are prevalent all over the world and we’ve sold as many shirts outside the country as inside it.

We’ve just recently re-negotiated with our carrier to get our shipping costs lowered, which is especially advantageous for international buyers. With the new policy, they will pay the same amount as domestic buyers: just $3.99 for one shirt. But here’s the real deal: anybody in the world–domestic or international–who orders two or more shirts, receives FREE shipping.

Where can fans follow ‘George Shot First’ on social media?

And then there’s always our official blog, which you can find at georgeshotfirst.com/blogs/news. 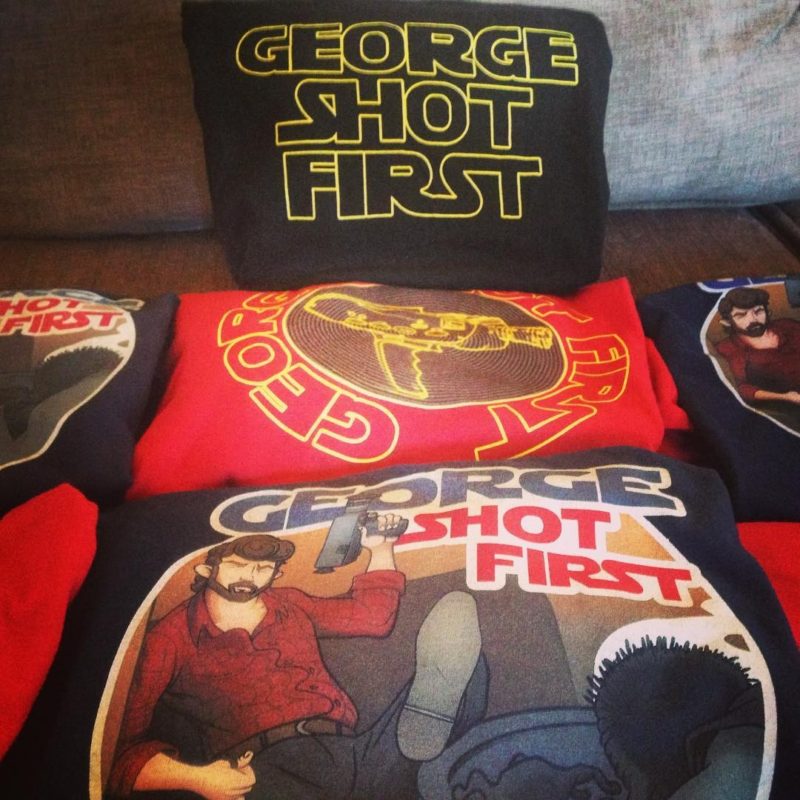 Many thanks to Michael from George Shot First for answering my questions. It’s great to see the talented film maker, writer, and Star Wars creator George Lucas being celebrated. Fashion with a positive message – that’s something I always love to see in the fan community!

Photos supplied by and belong to George Shot First.