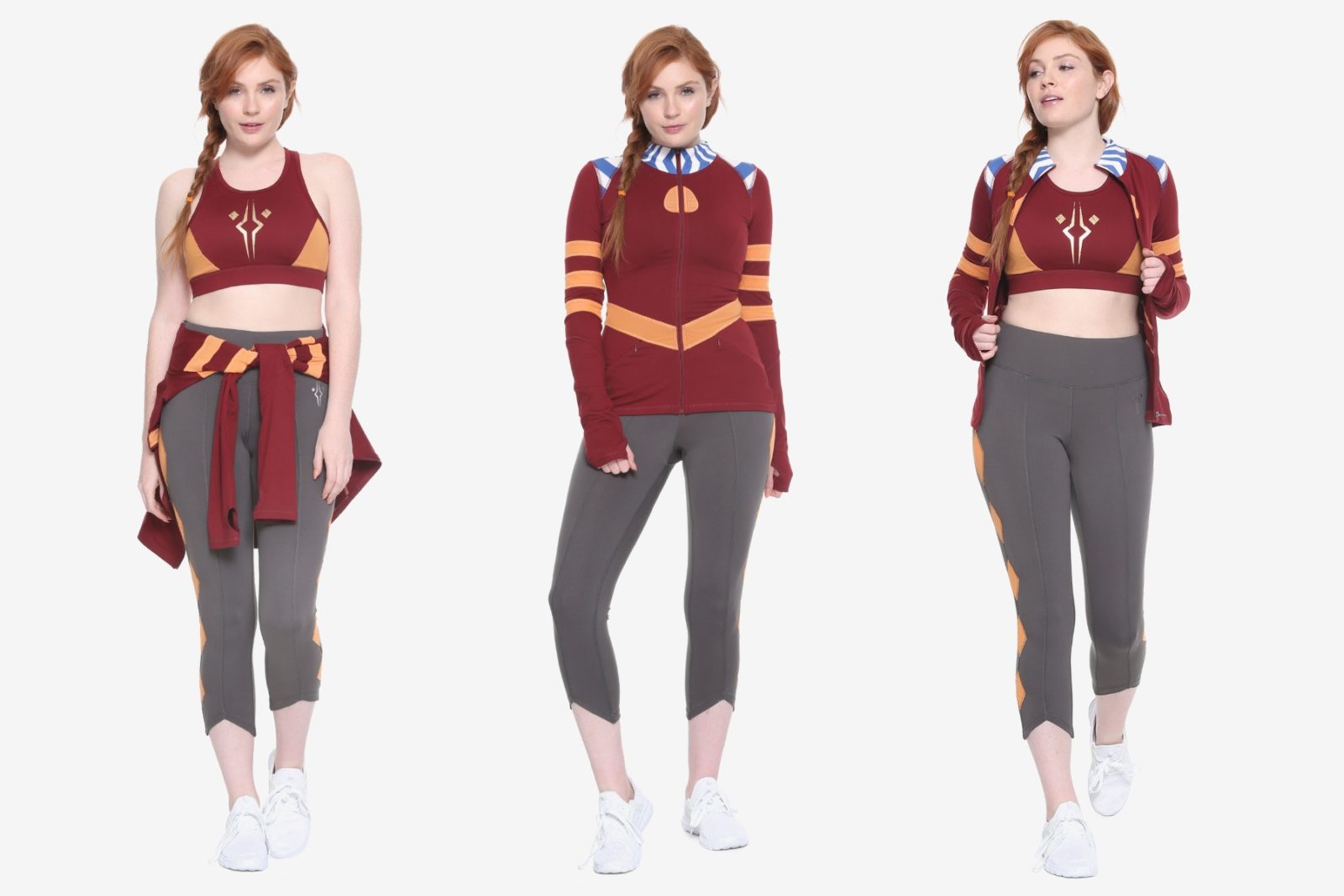 Fabulous news from Her Universe – they have released a new Ahsoka Tano Active Collection! The range includes a track jacket, sports bra, and active capris. Each item is inspired by Ahsoka’s jedi outfit from the later seasons of the animated television series The Clone Wars. Her grey and maroon outfit was also a favourite of mine – it translates so well to active wear! The designs also feature a nod to Ahsoka’s role as Fulcrum in Rebels, with her Fulcrum logo also included on each item (most prominently on the sports bra).

More great news – this range is included in the ‘buy two, get one free’ Star Wars promotion at Hot Topic! Celebrate May the 4th by treating yourself to some great new Ahsoka Tano themed fashion!

Prices range from US$29.90 to US$49.90 each – the full range is available in sizes XS to 2X. Hot Topic can ship internationally, which is great! 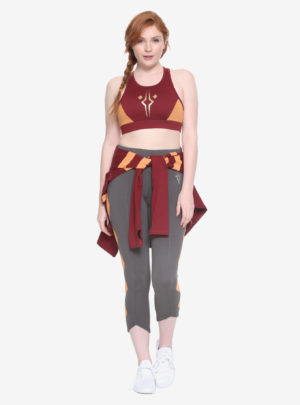 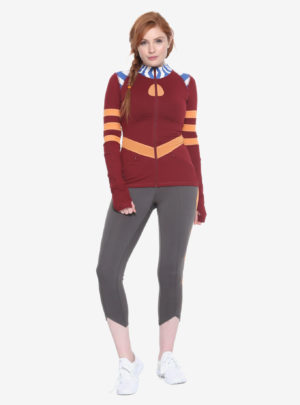 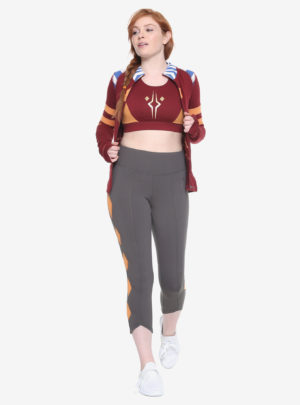 Cool down after training like a Jedi Padawan in this active jacket from Her Universe and Star Wars. The maroon zip-front jacket is designed after our favorite character from Star Wars: The Clone Wars, Ahsoka Tano. It has contrasting orange mesh on a large panel cut-out on the back, three stripes on the sleeves, a circle cut-out on the chest and a “belt.” Ahsoka’s Lekku gets a nod with the blue and white striped collar and shoulder panels, and the Fulcrum symbol appears in silver foil on the right hip. Hidden hip zipper pockets. 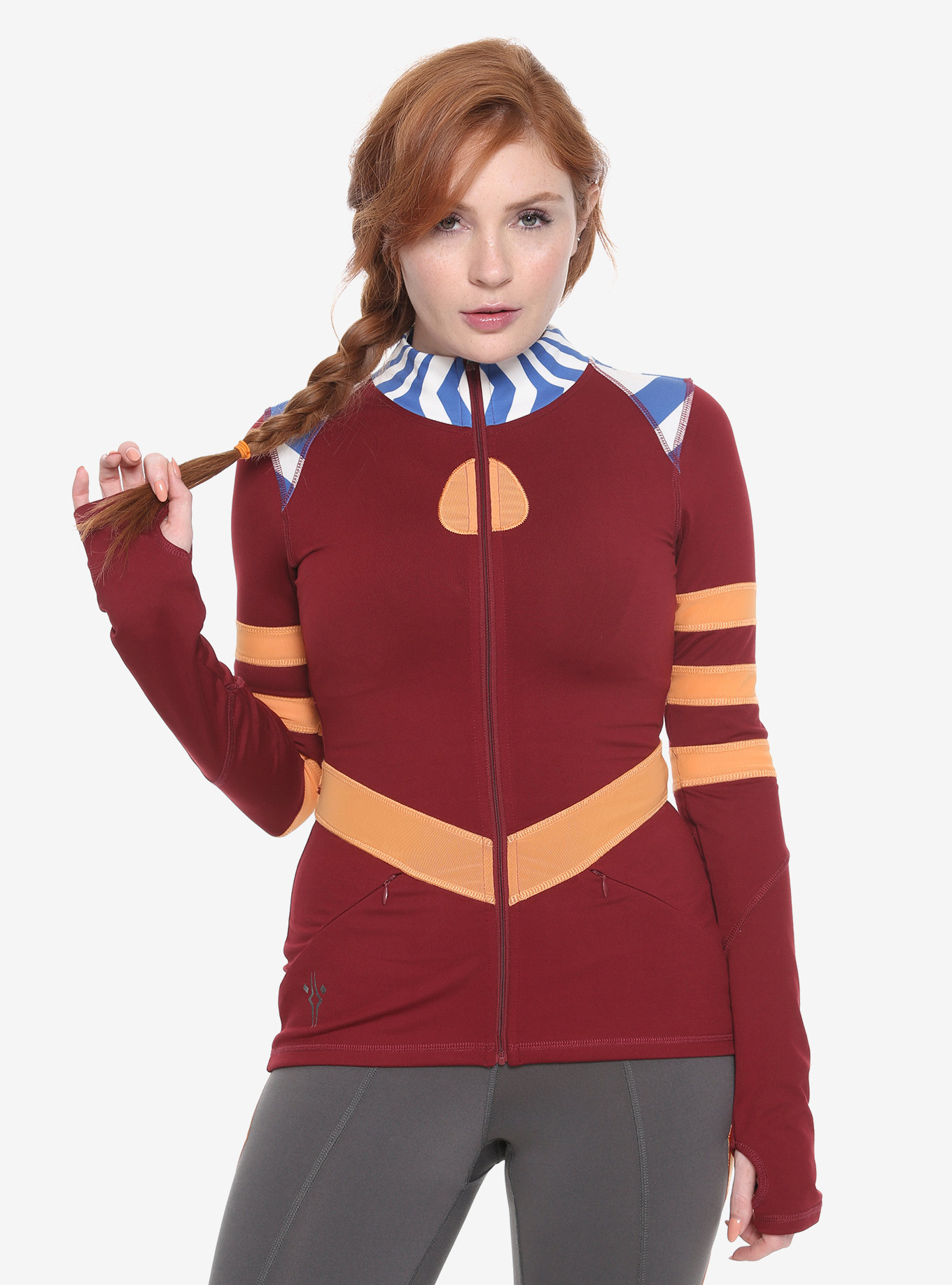 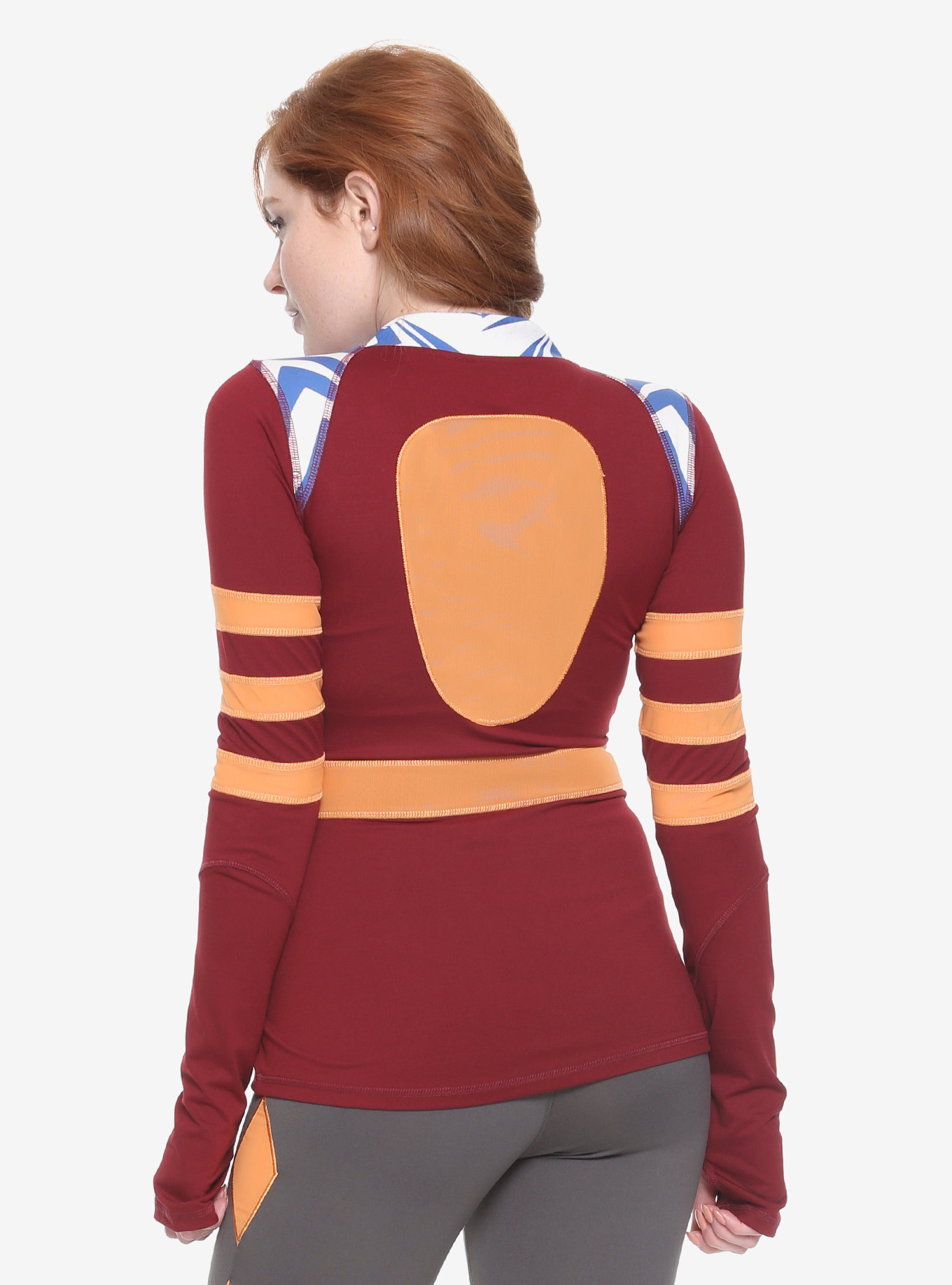 Train like a Jedi Padawan in this low-impact sports bra from Her Universe and Star Wars. The maroon racer back sports bra is designed after our favorite character from Clone Wars, Ahsoka Tano, and has orange mesh panel contrasting on the sides, a center back cut-out detail and the Fulcrum symbol in gold foil in the center of the chest. 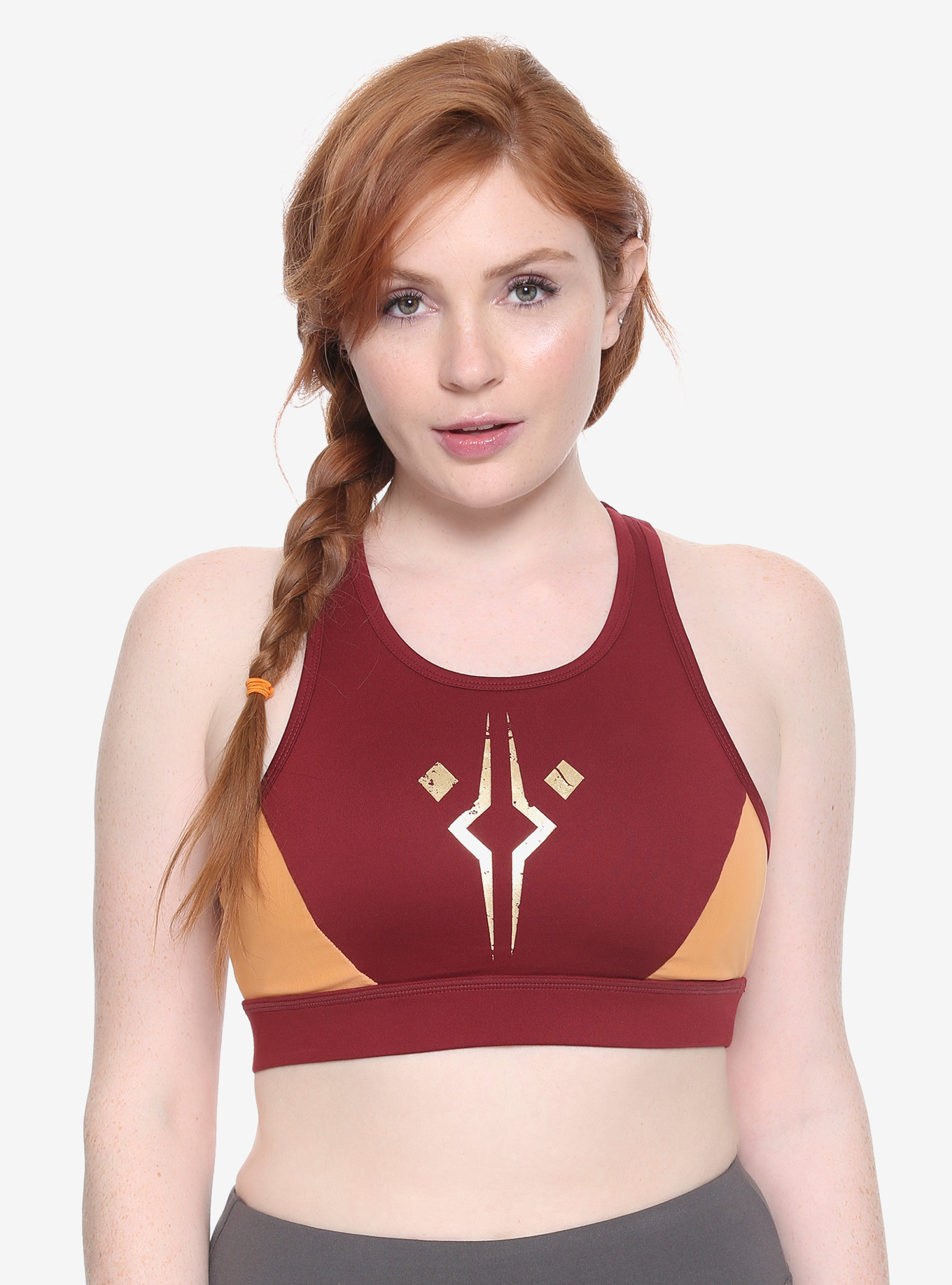 Train like a Jedi Padawan in these active capris from Her Universe and Star Wars. The grey capri pants are designed after our favorite character from Clone Wars, Ahsoka Tano. They have diamond-shaped orange mesh panels down the outside leg, a center back zipper key pocket and the Fulcrum symbol in silver foil on the left hip. 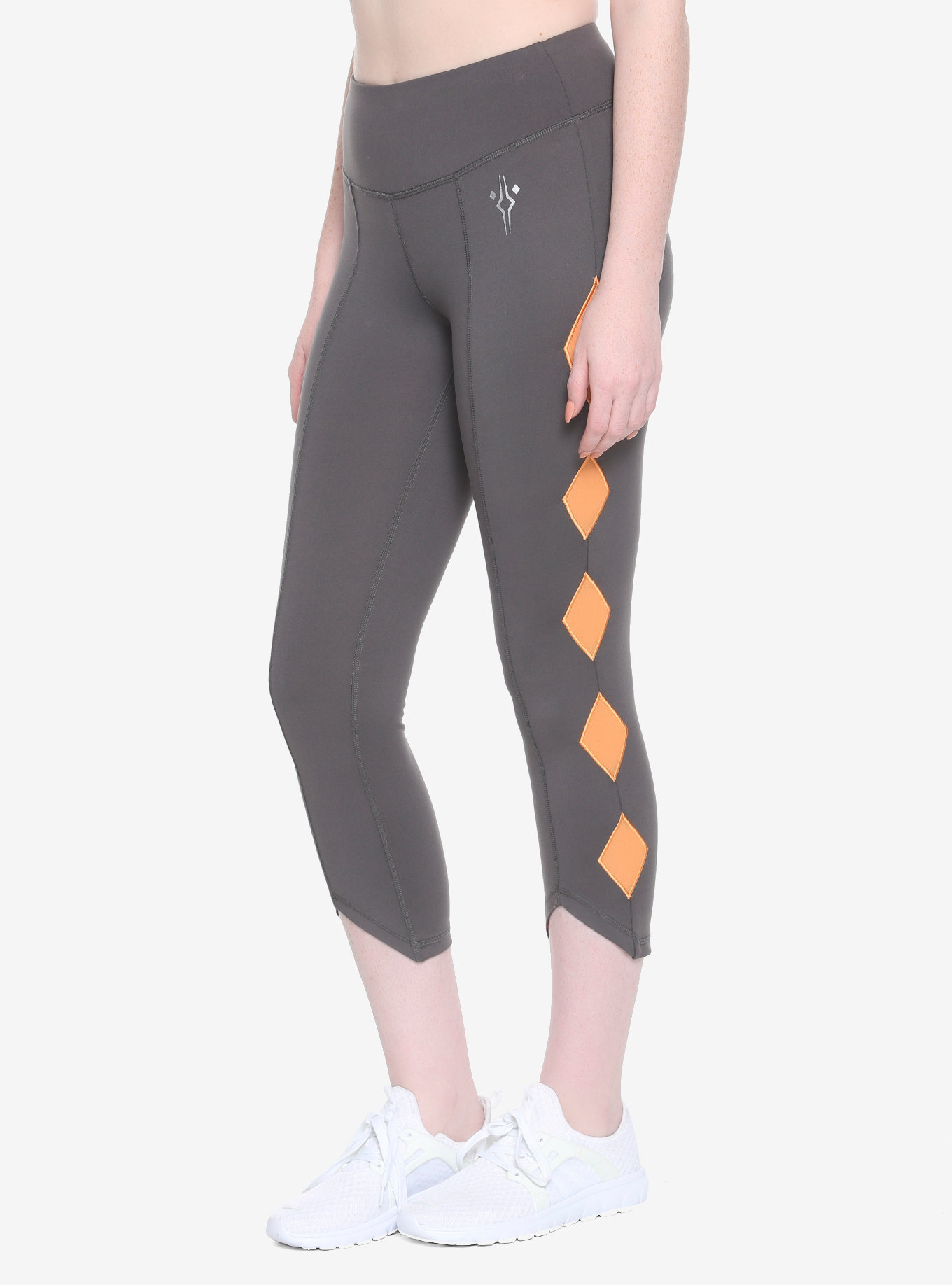 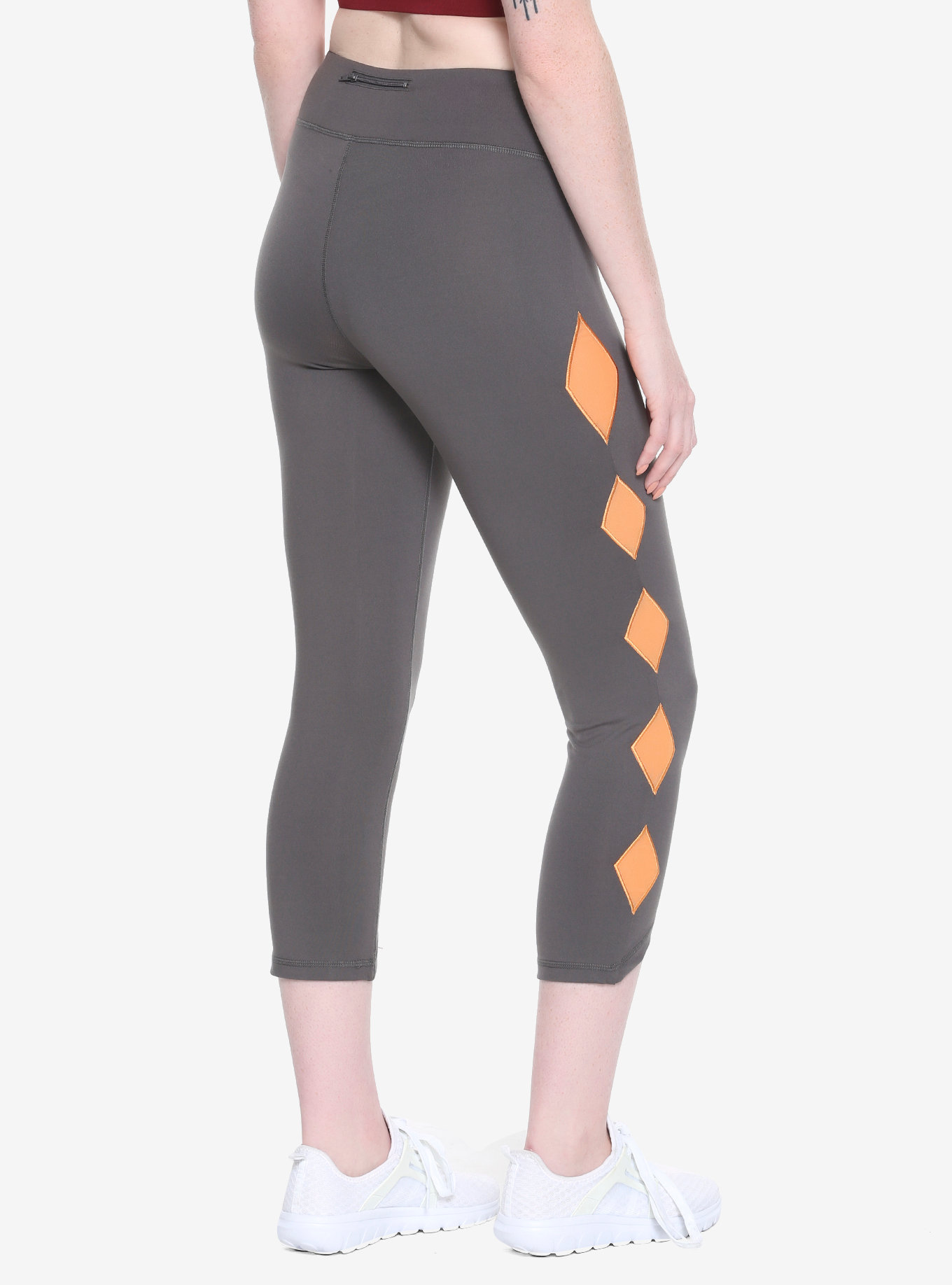 Photos sourced from and belong to Hot Topic.