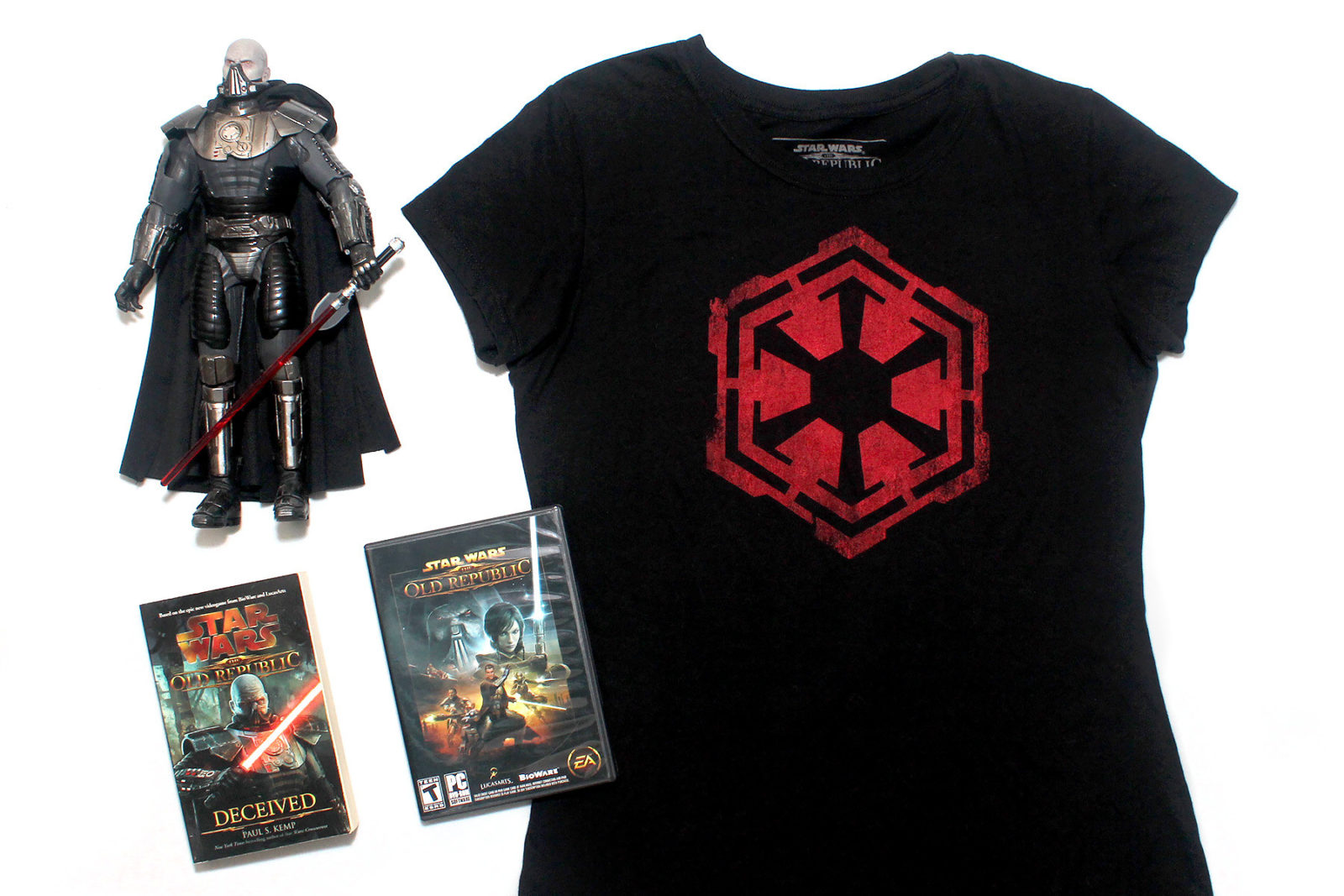 Today is the 5th anniversary of the launch of Star Wars: The Old Republic! On 13th December 2011, I was eagerly setting up my characters on the first early access day for fans who had pre-ordered the game. I was a huge fan of the original Knights of the Old Republic games, but had never delved into a mmo before. I tried out the beta test, and was instantly hooked. I mean hooked. I played every minute I could during those beta weekends, along with my husband – we’ve both been subscribers since launch.

In celebration of the game’s anniversary, I’ve gathered up my SWTOR apparel and accessories.

One of my favourite items of SWTOR merchandise is this promotional t-shirt. It is a women’s style t-shirt, featuring an all-over front print of the armour worn by the bounty hunter Shae Vizla. A random find on eBay, this is the only one I have ever seen for sale, so I quickly grabbed it. The lower back features a gold ink print of the SWTOR logo, typical of the t-shirts given away at ‘Cantina Tour’ promotional fan events. 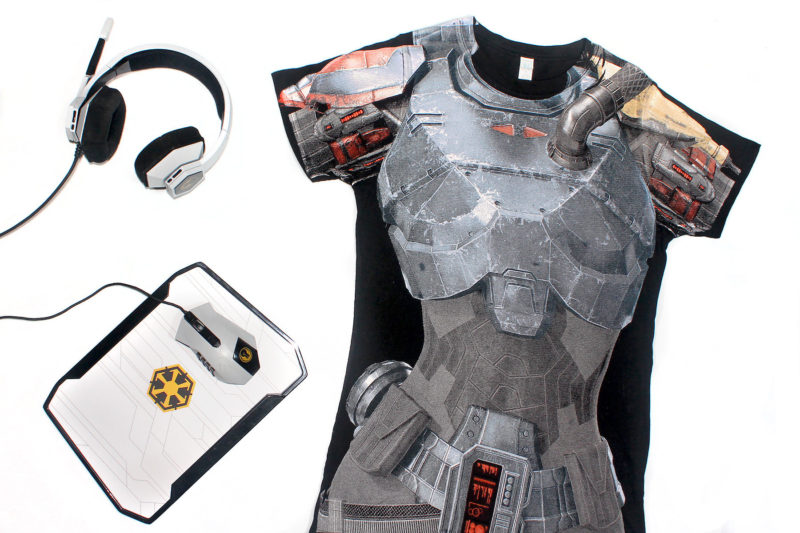 The games apparel company Jinx released a SWTOR collection in 2011, which included t-shirts, necklaces, and assorted items. I was excited to see jewelry in the range, and picked up both faction logo necklaces. As mentioned in my earlier review, I found the necklace chains too long, so I removed the pendants and wear them on a metal necklace ring instead.

I also bought the stickers, with a DIY project in mind – a belt buckle! With the help of my husband, we cut out a circle of styrene plastic, painted it, and applied the Republic logo sticker to the front. On the back we glued 2 dome studs, and attached the matching dome backs to the ends of wide belt elastic. I love wearing this style of belt with skirts, so I can add a little extra touch of SWTOR to my wardrobe. 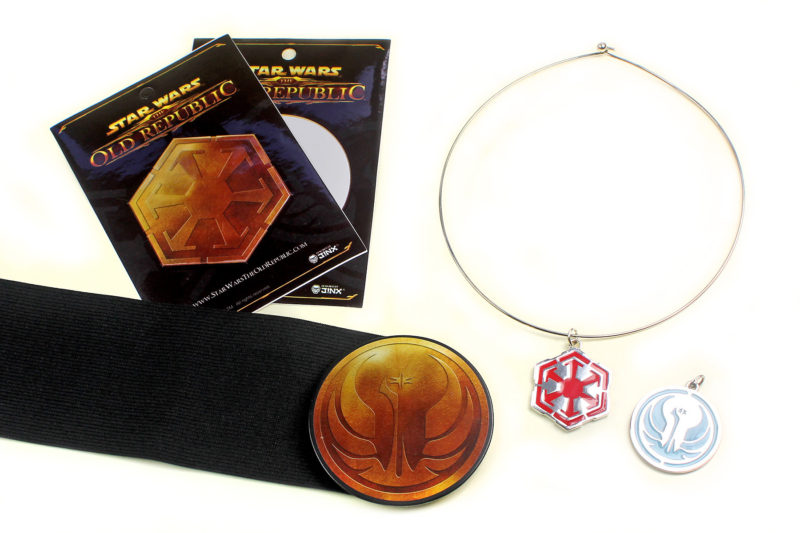 The Jinx SWTOR collection included a large range of t-shirt designs, available in both women’s and men’s styles. I picked up the Sith Empire and Old Republic symbol women’s t-shirts – I wish I could have bought more from the range, but the collection was retired before I could do so. In any case, these are some of my most-loved (and most worn) t-shirts, a great comfy tee for evening SWTOR raids with friends.

While I’m usually more Light Side, in SWTOR I love playing characters on both sides, so I had to get both the Empire and Republic tees. I really love these Star Wars symbols, and wish I had more apparel with them on it. 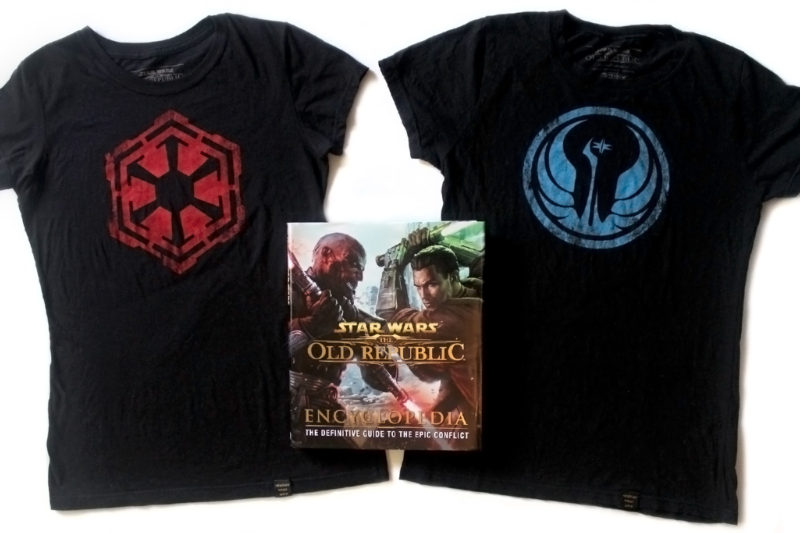 It has been quite a few years since the Jinx SWTOR collection was retired, and I really wish a company would once again pick up the SWTOR apparel license. The game has come so far since launch (I could talk for hours about the awesome story lines and additional features available now), and it is frustrating that no one is currently producing licensed SWTOR apparel.

I desperately want t-shirts with Satele Shan, Lana Beniko, Senya Tirall and Vaylin on them! These great female Star Wars characters deserve to be featured on apparel – someone please make this happen 🙂 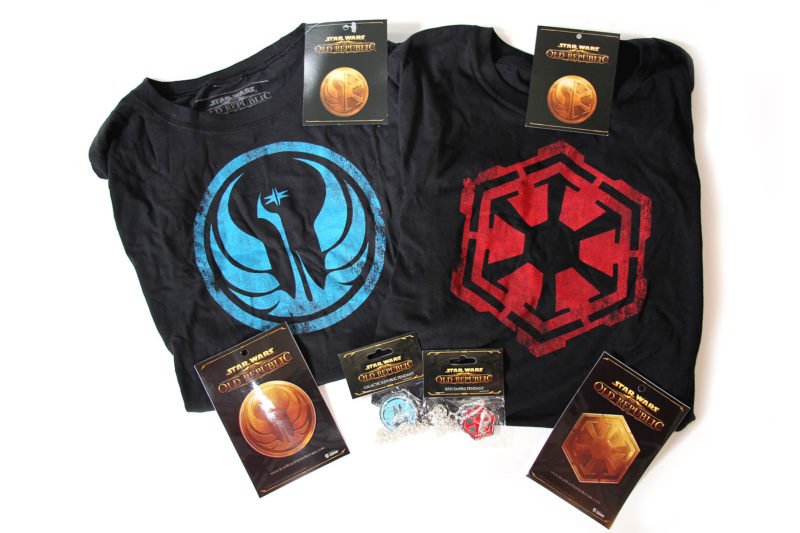 If you’re interested in checking out the game for free, my Friends of SWTOR referral link will give new players (or returning subscribers) an extra in-game bundle to get you started 🙂

Watch the latest SWTOR ‘Betrayed’ cinematic trailer below, which is a great introduction to Senya and Vaylin.