As soon as Gold Bubble Clothing announced their Han Solo inspired bloodstripe leggings, I knew I had to have them. When they were finally released, I had just spent a bit on Black Milk Clothing x Star Wars pieces during a rare sale, so I could only afford to pick up the red/blue version. Thankfully, Gold Bubble Clothing brought the designs back for a second release later, and I was able to grab the yellow/brown version too.

When they first started out, Gold Bubble was using a fabric printing company to handle the custom printing – after some unfortunate headaches with suppliers, they now print their own fabric in-house. This means that their latest designs are higher quality – in both print and fabric. The red/blue leggings I have are the first release versions (before they switched to in-house printing), the fabric is a little thinner. The yellow/brown leggings I have are after they changed to in-house printing, with thicker, higher quality fabric and the printing appears crisper. You can see a comparison between the two in my photo below. Not to say that the first versions weren’t up to standard, but it’s nice to see Gold Bubble overcome that hurdle and come out with an improved product. They are both fantastic leggings, with thicker fabric than some other current Star Wars leggings (like these).

The fit and sizing is the same as most geek legging companies, so I stayed with my usual size, small. I paid US$69 each, which is a little more than Black Milk leggings, but totally worth it for the great design and supporting fellow Star Wars fans. Both designs are not currently available, but have been brought back out of the archive for short releases in the past, so follow Gold Bubble Clothing on Facebook, Instagram and Twitter to be notified of releases, sales and other news. 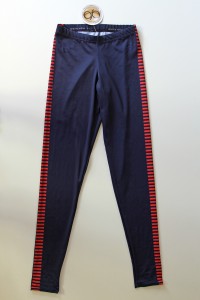 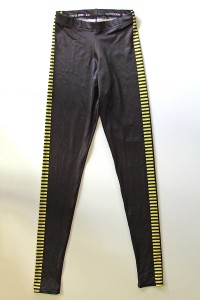 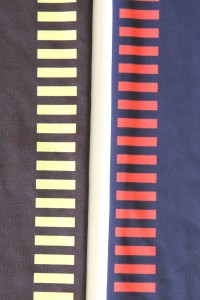